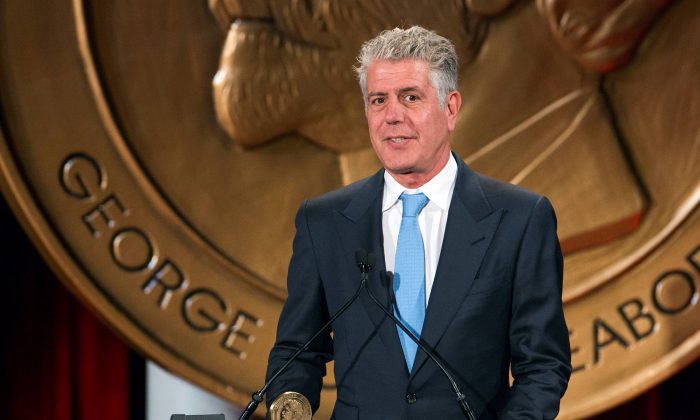 Television personality Anthony Bourdain speaks about the show "Parts Unknown" after the show won a Peabody Award in New York on May 19, 2014. (Reuters/Lucas Jackson/File Photo)
US News

French officials said that Bourdain killed himself in a Paris-area hotel room while he was filming the CNN show “Parts Unknown.” In February, he was interviewed by Popula, which published the article on July 15.

At the time of the interview, Bourdain was dating Italian actress Asia Argento, who, according to People magazine, once accused Weinstein of sexual assault and sexual harassment. She said the assault took place two decades ago in a hotel room.

In the interview, Bourdain gave a detailed fantasy of Weinstein’s demise. “And he dies that way, knowing that no one will help him and that he is not looking his finest at time of death,” he concluded.

The chef also criticized the Clintons for how they handled former President Bill Clinton’s affair with Monica Lewinsky and other allegations of sexual misconduct.

Bill Clinton is “rapey, gropey, grabby, disgusting, and the way that he—and she [Hillary Clinton]—destroyed these women and the way that everyone went along, and, and are blind to this,” Bourdain said.

“How you can, on the one hand, howl at the moon about all these other predators and not at least look back?” he asked.

The Clintons, Bourdain added, “efficiently dismantled, destroyed, and shamelessly discredited” women who came forward with accusations of sexual misconduct against the former president.

Three women, including Juanita Broaddrick, Kathleen Willey, and Paula Jones have publicly accused Clinton of sexual misconduct. The former president has denied the allegations against him. Bourdain didn’t reference their names in his interview. In 2016, a Clinton campaign spokesman, Brian Fallon, told The New York Times that the allegations represented an attempt to “draw Hillary Clinton into decades-old allegations through recent fabrications that are unsubstantiated.”

During the 2016 presidential campaign, then-candidate Donald Trump brought Broaddrick, Willey, and Jones as guests to the second 2016 debate with Hillary Clinton. Trump also made references to Bill Clinton’s alleged misconduct.

Broaddrick has been particularly vocal about the allegations on Twitter since the 2016 campaign.

“Evil and criminal abuse of power have exuded from Hillary Clinton and her Rapist husband for decades. If they go down (and Hillary has warned) there will be a ‘domino effect’ like no other in our history,” Broaddrick wrote on Twitter on July 5.