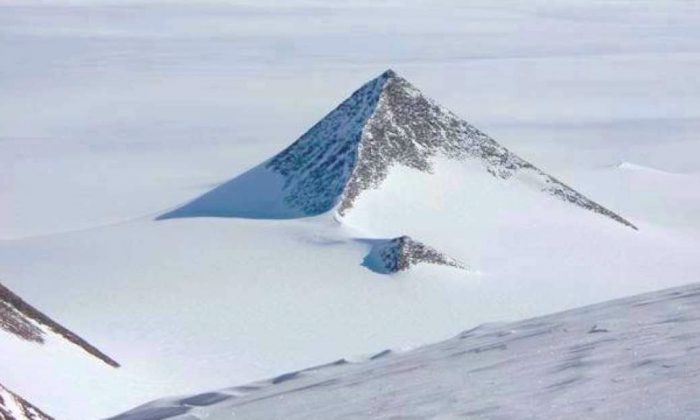 A pyramid-shaped mountain in the Ellsworth Mountain range of Antarctica. (Google Earth)
Trending

Discovery in Antarctica Changes Everything We Think We Know About Aliens

A breakthrough scientific discovery in the Antarctic shows that life can survive on little more than thin air, challenging our most basic assumptions around extraterrestrial life.

“We propose that atmospheric H2, CO2 and CO provide dependable sources of energy and carbon to support these communities,” the study states.

It would appear, then, that life does not need earth or sun to thrive.

“Atmospheric energy sources can provide an alternative basis for ecosystem function to solar or geological energy sources,” the study says.

According to the study, not only can the newfound bacteria remain alive in the most extreme conditions found on Earth, they could potentially survive on other planets, in conditions that were previously thought inhospitable to life.

“Our results provide new understanding of the minimal nutritional requirements for life and open the possibility that atmospheric gases support life on other planets,” the study says.

Therefore planets that were previously ruled out for holding life could be looked at again for liveable regions.

“This new understanding about how life can still exist in physically extreme and nutrient-starved environments like Antarctica opens up the possibility of atmospheric gases supporting life on other planets,” lead researcher Dr. Belinda Ferrari told New York Post.

More research is needed, authors of the study say, to find out just how widespread the newly discovered phenomenon is on Earth, but the current findings are considered groundbreaking.

“Whereas most ecosystems are driven by solar or geologically derived energy, primary production in these Antarctic desert surface soils appears to be supported by atmospheric trace gases.”

The discovery was the result of DNA sequencing and analysis of soil samples collected from Antarctica, considered one of the most extreme environments on Earth.

The discovery, it would appear, is a game-changer. It also comes ahead of an expected major NASA announcement to be made at a press conference on Thursday, Dec. 14, regarding its latest investigation into what lies beyond our solar system.

The space agency will be announcing the latest discovery by the Kepler space telescope, which has been searching for planets and extraterrestrial life since 2009.

For those who wish to review the data used in the “Atmospheric trace gases support primary production in Antarctic desert surface soil” study, the raw shotgun sequencing datasets generated during the study can be found in the National Center for Biotechnology Information (NCBI) Sequence Read Archive (accession numbers SRR5223441, SRR5223442, and SRR5223443).