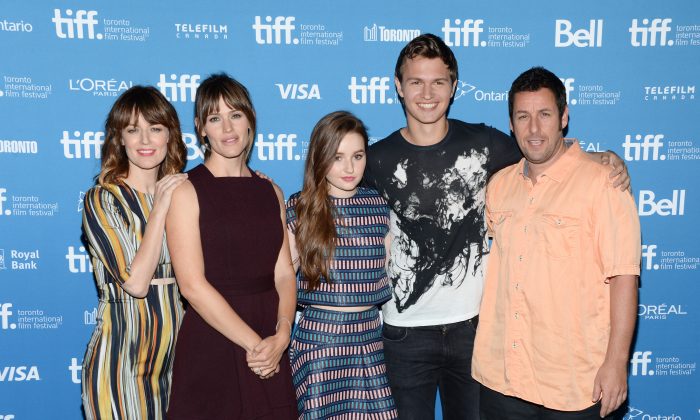 TORONTO—Young Hollywood actor Ansel Elgort, who stars in Jason Reitman’s “Men, Women & Children” had to explain to his co-stars Adam Sandler, Jennifer Garner, and Rosemarie Dewitt what Snapchat is. Then he taught them Social Media For Celebrities 101.

During the press conference for “Men, Women & Children,” which premiered at the Toronto International Film Festival (TIFF) on Saturday, September 6, 2014, Elgort told the press how he came into the social media scene.

“I got my first smart phone when I was 15, which was five years ago,” said Ansel Elgort at the press conference. “I think in like 20 years everyone will have a better grasp on how technology is changing our lives,” Elgort said, acknowledging that even those of his generation don’t quite understand how to quite grasp new technology.

“Men, Women & Children” highlights the dangers of searching for intimacy with the help of the internet and how relationships are affected because of different perspectives of what the internet can do. While kids find an escape in games and anonymous social media accounts, parents find it a potent, dangerous tool.

“Everyone’s on Snapchat, because no one can monitor what you’re doing there,” Elgort said. “Once my mom has a Facebook and a Twitter and an Instagram, I don’t want to be there anymore,” he explained.

“Every person with an iPhone is now a paparazzi now,” Elgort said.

Elgort, however, acknowledged that social media is powerful tool that provides celebrities with a platform to release reliable news out into the world.

“No publication has as much power as you do,” Elgort said. “If I never post about who I’m dating, people will think that I’m not dating anyone, even if tons of news articles are saying that I am dating someone,” Elgort said.