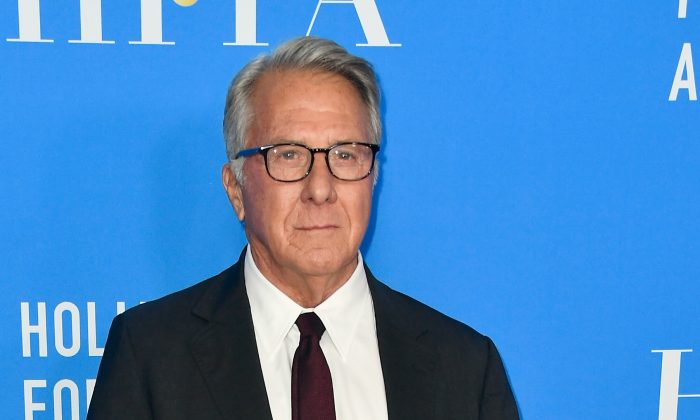 Her allegations come after Anna Graham Hunter accused Hoffman last month of sexually harassing her when she was 17 and worked as a production assistant on the set of “Death of a Salesman,” a TV movie in 1985. Hoffman later said he doesn’t know who the woman is and that he‘s never met her or not met her alone.

Rossetter wrote in an article published by The Hollywood Reporter on Friday, Dec. 8, that Hoffman regularly groped her when the two worked together on the Broadway revival of “Death of a Salesman” starting in 1983.

She said she was too young for the role of Willy Loman’s (Dustin Hoffman) mistress. But after she read for the scene with Hoffman, he complimented her laugh and requested she get the role.

“That was the beginning of what was to become a horrific, demoralizing, and abusive experience at the hands [literally] of one of my acting idols,” she wrote.

Aside from her role, Rossetter was also given the task to stand in the wings during the show and laugh in a microphone on cue.

She said Hoffman would sit on a chair behind her and grope her thighs almost every show, which played 6-8 times a week. One time he also groped her private parts, she wrote. She tried to shake him off, but couldn’t say anything because she was facing a live microphone.

One time he even pulled her dress over her head, exposing her body to other crew members in the wings, she wrote.

In addition, whenever they were taking a picture together, Hoffman would grope her breast and quickly remove his had before the picture was taken, she wrote. She said one time he didn’t remove his hand fast enough and the photographer captured him in the act.

“There I am—big smile and my arm moving toward his with the intention to push it away. But caught as it is, it seems I’m complicit with the gesture. I was not. Not ever,” she wrote.

“I tried to laugh it off, smack him and say witty, pointed things. I begged him nicely with tears in my eyes to please stop it. To no avail,” she added.

Rossetter said she didn’t come forward with the allegations at the time because she was afraid Hoffman would seek revenge against her and cause her to lose her job and career.

Hoffman hasn’t denied Rossetter’s account to The Hollywood Reporter, but his attorneys connected the publication with at least seven people who worked on “Death of a Salesman” and said they don’t recall Hoffman doing what Rossetter has alleged.

“It just doesn’t ring true,” said production stage manager Tom Kelly. “Given my position, it’s insulting to say this kind of activity would go on to the extent of sexual violation.”

Hoffman is but one of many celebrities in the movie and television industry recently accused of sexual misconduct, including Matt Lauer, Harvey Weinstein, and Kevin Spacey.