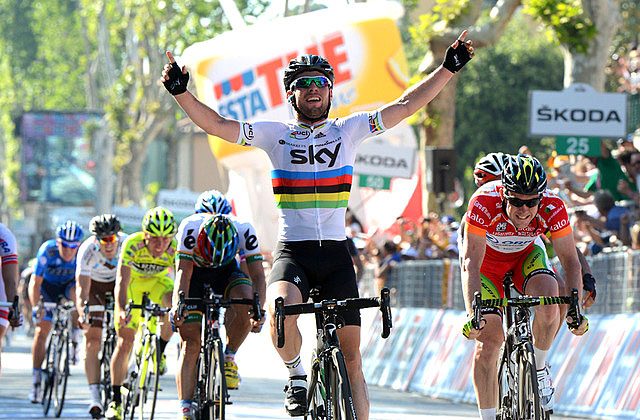 Another Win for Cavendish in Giro d’Italia Stage Five

The numerous hills in the final forty kilometers of Stage Five of the Giro d’Italia slowed a lot of sprinters but not all of them. Fastest among those who made it over the inclines was Sky’s Mark Cavendish, who earned his eighth Giro and 32nd Grand Tour stage victory by once again being “The Fastest Man in the World.”

While a few big sprinters like Tyler Farrar, Theo Bos, Roman Feillu, and Andrea Guardini rolled home nine or more minutes late, several sprinters stuck around to make it a contest. The fastest of these was Orica-GreenEdge rider Matthew Goss, who finished a couple bike lengths ahead of all the other competitors—and a bike-length behind Mark Cavendish.

The Manx Missile dominated the sprint, despite being less than 100 percent after his crash Monday.

“I didn’t feel great three days after the crash. I was a little bit tired and we did really what the other teams have done and let the others do the work,” Cavendish said on the Sky website. “But we were able to commit all our guys at the end and we took the race up with 10k to go and it was textbook work from the team.”

“I’m even more happy because my girlfriend and my daughter are here and I had my daughter on the podium. It’s the first race she’s been to watch me at and I’m so happy to make her proud and win for her here.”

Teamwork made the difference. In the final few kilometers Sky was able to line up six riders in a leadout train to deliver their man to the right spot in the best possible condition, while none of the other teams were able to organize. Matt Goss, who took second, got there by using Cavendish as a leadout because GreenEdge couldn’t get it together.

Teamwork also mattered in the short, frequent climbs which made the end of this stage so difficult. “The guys were all around me on the climbs and we started in a good position so I stuck with them. I was never in any trouble. It wasn’t easy at all but I’ve good form and the guys really looked after me there so I was lucky enough to get over it in reasonable condition,” Cavendish explained.

Sky’s train had to run longer than usual because of the slight slope to the road and the wind direction, but they did the job perfectly.

“It wasn’t an easy finish. There was a headwind and I only went with 200 meters to go. It felt like a long time because of that headwind and I could see Gossy’s shadow but I was able to hold him off. I’m super, super happy!”

The race started with a four-rider break attacking in the first 15 kilometers—Alessandro de Marchi (Androni,) Pier Paolo de Negri (Farnese Vini,) Olivier Kaisen and Brian Bulgac (Lotto-Belisol) never got much over six minutes ahead as the roads for the first 150 km of this 199-km stage were straight, flat and wide; the peloton had no trouble controlling the gap.

A couple of crashes interrupted the peloton in the final 45 km, as everyone got nervous about the approaching hills. Saxo Bank’s Lucas Sebastian Haedo was looking behind and hit the man in front, flooring himself and teammate Manuele Boare. BMC’s Taylor Phinney got caught in this one—the American youngster has certainly seen the highs and lows of cycling this week—and Ag2R’s Elai Favili, who managed to fight all the way back to the front to take seventh in the sprint.

Another crash a few km later claimed two BMC riders, too busy looking for teammates for the climbs to focus on the approaches.

The only categorized climb of the day was the Cat 4 Gabicce Monte, two km at an average of 4.8 percent but some spots up to nine percent. This climb cracked Thor Hushovd, who had been a favorite for the uphill finish, and Tyler Farrar, along with a handful of other sprinters who never managed to reconnect with the peloton.

The breakaway split with 35 km to go ad Alessandro De Marchi decided he could do better alone. The remaining three were caught in ten km; De Marchi made it another ten. Then it was gruppo compatto, and the sprinters’ teams started struggling to control the head of the peloton.

GreenEdge and Rabobank both tried to organize, but Sky had managed an HTC-Columbia-style grip on the head of the peloton.

3.2 km from the finish, Lotto-Belisol’s sprinter Adam Hansen incomprehensibly attacked, but that didn’t last. Coming into the final two km, Sky still had four riders in front of Cavendish; under the one-km flame rouge Cav still had two. Colnago’s Sacha Modolo rode Cav’s wheel with Matt Goss next in line.

Goss had to go around Modolo and then Cavendish, and the extra few meters were too much. Cavendish took the win, with Goss leading RadioShack’s Daniele Benatti and Garmin’s leadout man Robbie Hunter. Modolo held on for fifth.

The leader’s pink jersey stays with Garmin’s Ramunas Navardauskas, followed by teammates Robbie Hunter and Ryder Hesjedal. These standings will be completely overturned once the hills start happening—as they will in Stage Six which has four categorized and eleven uncategorized climbs. This is a classic breakaway stage, but it is too early in the race, and the peloton too fresh, for any teams to allow a breakaway to succeed.

Look for a sprint among climbers to end this stage, and look for GC contenders to be moving to the fore here.