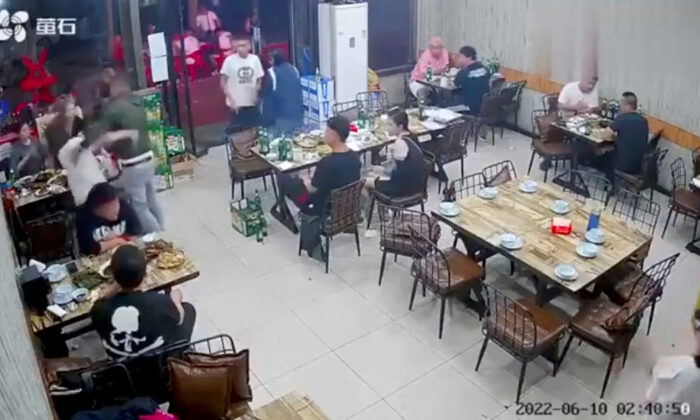 A man assaults a woman at a restaurant in the city of Tangshan, China, on June 10, 2022. (Surveillance footage/Screenshot via Reuters)
Social Issues

Another Vicious Assault of a Woman Caught on Camera, Repeatedly Run Over by a Car

Following the assault of four young women at a barbecue restaurant in Tangshan, China, another brutal incident involving a woman happened in the same city. A video showing a local man repeatedly running over a woman in a parking lot has gone viral and sparked public outrage.

On August 2, a number of videos posted on social media showed that in an open-air parking lot in Guzhi District of Tangshan, a woman in white lay motionless on the ground, while a man in a white car repeatedly runs over her. Bystanders dragged her closer to a row of parked cars to avoid being run over again.

However, the white car accelerated towards her again and the bystanders hurriedly got out of the way. In order to have enough space to continue to run over the woman, the white car pushed a car out of the parking spot, and then kept turning in circles and backing up, running over the woman at least four times, before finally fleeing the scene.

After the video went viral, Tangshan police issued a statement, saying that the victim, a woman surnamed Wang, was working in a local swimming pool nearby and had a row with her boyfriend surnamed Zhang in the parking lot. Then Zhang ran her over with his car, and nearby residents and security guards came to her rescue and pulled her aside. However, Zhang continued to drive in a circle and crushed the woman to death.

The police announced that the incident happened on the morning of Aug. 2, Zhang was arrested that afternoon, and the details of the case are still under investigation.

However, after the incident at a barbecue restaurant on June 10, where four women were beaten by a group of men belonging to a gang, the police, officials, and media have lost their credibility with the public. After the incident, the local authorities issued several contradictory statements about the case, and were suspected of covering up the truth, while the women’s whereabouts and whether they are alive or dead are still unknown. Many questions remain unanswered, and the local police chief was accused by the public of being involved with the local gang.

Chinese netizens posted their suspicions about the accuracy of the official statement about the woman being run over, questioning the “couple quarreling” narrative and saying it may be a cover-up of another more sinister case, or even a gang-related homicide.

Many internet users on Chinese social media are shocked by the brutality of the incident. One said in a post, “Is that blood on the ground? Isn’t it way too cruel?” Another said, “It’s obviously an intentional homicide! He must be severely punished!” Another post read, “Too many vicious incidents have happened, and the authorities should do something about it.”

The video also triggered a public outcry on Twitter. One person said: “The living environment of Chinese women is very bad. Such great hatred, the bystanders tried to save the woman but still couldn’t stop the crazy driver.”
Another said: “Now in China, everyone has so much inexplicable hatred in their hearts. It’s out of control.”