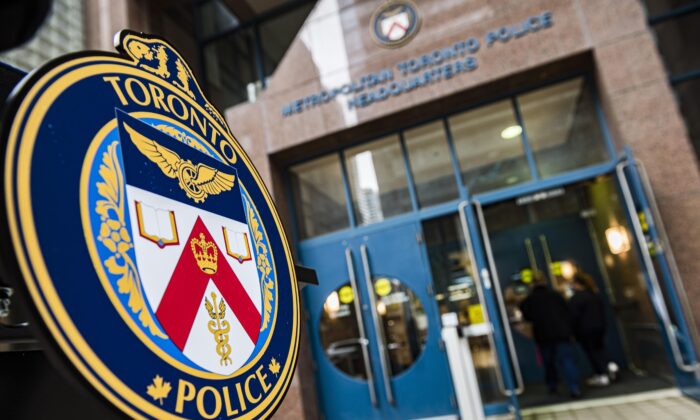 The Toronto Police Services emblem is photographed during a press conference at TPS headquarters, in Toronto on May 17, 2022. (The Canadian Press/Christopher Katsarov)
Canada

Another teenager has been arrested and charged by Toronto police following an armed carjacking in the city’s northwest area last week.

Toronto Police Service (TPS) responded to the incident on May 11, which occurred in the Millwick Drive and Islington Avenue area.

“Members of the Hold Up Squad continued their investigation and were able to identify another male involved in the robbery,” said TPS in a May 18 release.

Police said the victim was standing outside of his Jeep Wrangler in a parking lot when three males approached him. One of them pulled out a handgun and demanded the victim’s keys.

The keys were inside the Jeep so the armed suspect got into the vehicle and then attempted to drive away from the scene but, as he drove off, the Jeep struck a light pole in the parking lot and crashed as it turned onto the street.

“All males then fled the area on foot,” said the police, adding that officers were able to locate all three suspects shortly afterward and arrest them.

TPS said their officers found a replica handgun inside the Jeep immediately after the arrests were made.

A 15-year-old boy is charged with robbery with a firearm and disguising with intent while a 16-year-old and a 17-year-old, were “released unconditionally” after further investigation, the police said in a May 11 release.

In their update, police said they have arrested another suspect related to the carjacking investigation. A 17-year-old boy of Toronto is also facing the same charges.

Under the Youth Criminal Justice Act, the accused cannot be identified due to their age.