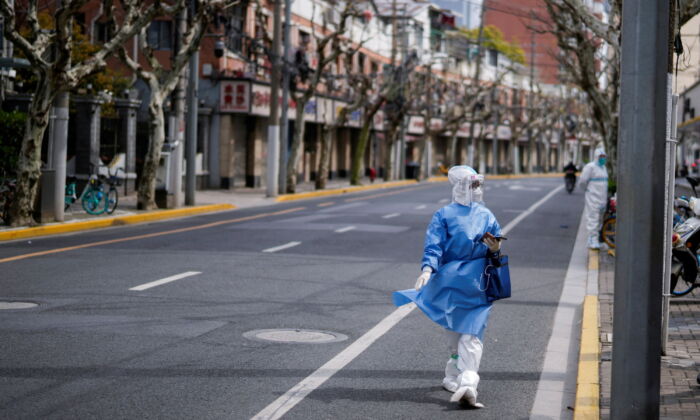 A worker in a protective suit keeps watch on the street as the second stage of a two-stage lockdown to curb the spread of COVID-19 begins in Shanghai, China, on April 1, 2022. (Aly Song/Reuters)
Thinking About China

Another Stall in China’s Economy

While the United States and Europe seem to have put the worst of the pandemic in the rearview mirror, COVID-19 still plagues China. A major rise in cases has forced lockdowns in Shanghai, the nation’s economic and financial center. It has done the same in other regions as well.

Unless the authorities can bring matters under control quickly, and that looks far from likely, China will have difficulty meeting its already downsized 2022 real economic growth target of 5.5 percent. Even that was less than two-thirds the pre-pandemic pace to which China had grown accustomed.

If the problems do not exclusively belong to Shanghai, that is where they center. Beijing’s “zero-tolerance” COVID policies have locked down this city of 25 million and are home to fully 4 percent of the entire nation’s economy.

To minimize the economic impact of the quarantines, the authorities have executed what they refer to as a “two-stage lockdown.” It will keep the city’s immense port, China’s largest, open and allow factories to continue operating in what is called a “closed-loop” system in which workers cannot leave the premises, sleeping in special dormitories or sometimes on the factory floor.

These practices ease some of the economic burdens of lockdowns and quarantines, but they do nothing to help services, four-fifths of Shanghai’s economic activity. What is more, the two-stage-closed-loop approach cannot ease problems with shipping goods in and out of affected cities as well as to and from ports.

These shipping problems promise to do the worst economic harm. Everything moves slower. Drivers must show a negative COVID test no older than 48 hours at several checkpoints along their routes.

The inevitable delays are increasing shipping costs that were already rising 8 percent to 10 percent a year. Many drivers have become reluctant to bring cargos into affected areas, fearful that they will get stuck under a quarantine.

Already some producers have informed foreign customers that they will have to wait an extra 10 days for delivery. And because of the sluggishness of shipping, warehouses are filling. Once they are full, it will no longer matter that factories are operating. There will be no place for the output to go.

Beijing has played down the potential economic damage, claiming first that the lockdowns would last only 10 days and then extending them to two weeks before admitting that they are now indeterminate. As of mid-March, the most recent period for which data are available, container throughput indicates that domestic trade has already fallen 24.4 percent below year-ago levels.

The March report of the Caixin/Markit Manufacturing Purchasing Managers Index showed an outright decline in national output. At a level of 48.1, it was considerably below the 50 that demarcates the difference between expansion and contraction.

The equivalent official measure from the Statistics Ministry in Beijing was more moderate, but at 49.5 percent, it, too, signaled a decline. Tellingly, the official index for export orders also showed a decline to 47.2 in March from 49.0 in February. Of course, services were most affected by the lockdowns. Nationally, Beijing puts its index for March at 48.4, a sharp change from February’s 51.6 level.

Despite the weight of this evidence, official China continues to assert that the national economy will achieve the 5.5 percent growth target for 2022. Premier Li Keqiang restated this claim less than two weeks ago. As usual, Beijing will claim success at year-end, regardless of reality.

But others have been more forthcoming. Goldman Sachs, for example, notes that COVID problems extend well beyond Shanghai and already impact some 30 percent of the Chinese economy. UBS has lowered its 2022 forecast for Chinese real growth to 5.0 percent and holds out the possibility of only 4.0 percent growth should the lockdowns and quarantines persist.

Meanwhile, the highly regarded Institute for Public Policy in Australia’s Sydney University of Technology has concluded that COVID and the effect of the war in Ukraine will lock China out of the global economy until 2024.

Even if this prospect sounds too extreme, it should be clear that China’s economy is no longer the growth juggernaut it was once thought to be.