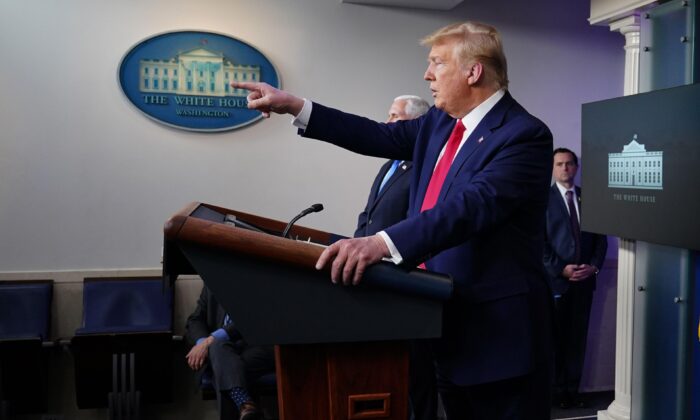 President Donald Trump at the daily briefing on the CCP virus in the Brady Briefing Room at the White House on April 6, 2020. (Mandel Ngan/AFP via Getty Images)
By Petr Svab

For the second time, a reporter working for a media controlled by the Chinese Communist Party (CCP) failed to disclose this affiliation when prompted by President Donald Trump during the daily White House press briefing on the CCP virus pandemic.

After Trump prompted the reporter, Chang Ching-Yi, to state his question, Trump asked Chang where he was from, seemingly inquiring about his media outlet.

Chang responded that he was from Taiwan.

While that is where he was born, he works for Shanghai Media Group, a company owned by the Chinese regime.

This is the second time in the past several days a reporter from an outlet controlled by the CCP has attended the briefings and was less than forthright about his or her affiliation.

On April 6, a similar incident happened with Wang Youyou, a reporter with Hong Kong Phoenix TV.

Trump asked her whether she was working “for China.” She denied it, but several experts have noted that the Hong Kong television station is run by a former CCP military propaganda officer, and its programming is controlled by Beijing.

Letting Wang attend the briefing allowed her to air on live television what at least one expert spotted as CCP propaganda.

Due to the “social distancing” rules recommended by the White House during the pandemic, seating has been limited at the briefings, and reporters, usually from major American outlets, have been rotating in and out every day, coordinated by the White House Correspondents’ Association (WHCA).

It’s not clear what exact criteria are used to determine which reporters are allowed in and how any such criteria would apply to Chang and Wang.

The WHCA didn’t immediately respond to a request for comment.

According to his LinkedIn profile, Chang has been with Shanghai Media Group since July 2014. The company is a subsidiary of the Radio and Television Station of Shanghai, a large Chinese state-owned media conglomerate. For the prior four years, Chang worked at Phoenix TV.

After getting his bachelor’s degree in journalism and Arabic at a university in Taiwan, he studied for two years in Saudi Arabia and then got his master’s in international relations at New York University. He started his career with internships at the United Nations and NBC News.

The CCP is in the midst of a global propaganda push, trying to shirk responsibility for the CCP virus pandemic that has swept the world, infecting more than 1.4 million and killing more than 90,000.

The CCP virus, also known as the novel coronavirus, broke out in the central Chinese city of Wuhan around November and was allowed to spread around the world due to the CCP’s coverup and mismanagement of the virus.

The Epoch Times refers to the novel coronavirus, which causes the disease COVID-19, as the Chinese Communist Party (CCP) virus because the Party’s coverup and mismanagement allowed it to spread throughout China and create a global pandemic.