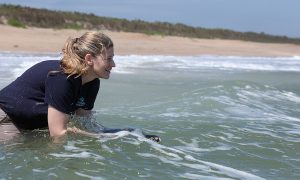 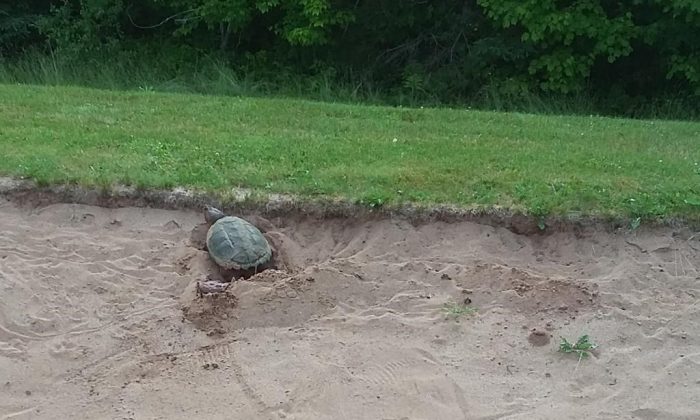 A snapping turtle named Shelley who has laid her eggs in the sand trap at the 7th hole for the second year in a row on the Debert Golf Course in Debert, N.S. is seen in this undated photo provided August 6, 2019. (HO, Mark Webb/The Canadian Press)
Canada

HALIFAX—Most golfers would rather avoid sand traps, and that’s especially true now on a course in central Nova Scotia where a resident snapping turtle has laid its eggs in the same bunker for the second year in a row.

With nature taking its course, the sand trap on the seventh hole of the Debert Golf Course has been declared off limits, course manager Mark Webb said in an interview Tuesday.

“We have a sign down there and it is a roped off area,” Webb said. “Everybody has kind of kept their distance, and if their ball lands in it, they pick it up and put it in another spot.”

Webb said the turtle nicknamed Shelley was rescued from the side of a road last year by a friend and brought to the course, where it has apparently made itself at home.

“At the time we thought it was a male, so we called it Sheldon,” he said with a laugh. “About two days later we had noticed that it had dug a hole in the sand trap and it had laid eggs.”

Webb said that after a hatching last September, he was able to help three of the baby turtles make it safely to a pond on the course. The nine-hole course has several ponds that provide an ideal turtle habitat.

After the young turtles hatched, Webb said the mother disappeared and the course staff didn’t see it until it turned up recently to lay more eggs.

“There are two or three big ponds and they are quite heavily cat-tailed up, so obviously she was living there the whole time and we didn’t even know it,” he said. “Like my wife said, obviously she found a friend and she laid eggs again.”

Webb said he still hasn’t seen last year’s little ones yet this year, adding they were “only the size of a toonie” when he helped them into the water.

Andrew Hebda, a curator of zoology with the Nova Scotia Museum, said while snapping turtles often lay eggs in June, recent cooler springs have meant the eggs are being laid later in the summer.

The current batch of eggs may not hatch until October Hebda said, and if gets cooler earlier in the summer or fall the hatchlings may not emerge from the trap until next spring.

Hebda said snapping turtles, which can live until the age of 60 or more, are listed as vulnerable in Nova Scotia. He said that’s mainly because of the high mortality rate of young turtles and the fact females have a tendency to lay their eggs at the sides of roads because of the favourable conditions the terrain can present, including warm gravel and asphalt.

That of course, raises the danger for the slow-moving reptiles.

“Unfortunately a lot of people tend not to slow down for wildlife unless they can possibly cause damage to their vehicles,” Hebda said.

The problem is so bad the Nature Conservancy of Canada issued a plea to motorists in eastern Canada in June asking them to slow down, noting there are eight turtle species in Ontario and six species in Quebec that are considered at risk.

In Quebec alone, 75 roads and highways have been identified as “hot spots” for vehicles striking turtles.

Hebda said the Debert turtle is fortunate to have found a habitat that includes a sand trap, because it presents “the ideal stable conditions” to suit it in the long run.