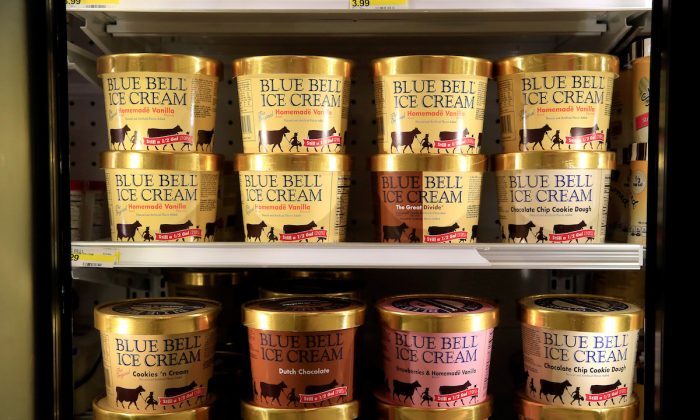 Police have released another photo of the woman who was seen in a viral video licking a tub of Blue Bell ice cream before putting it back at a Walmart in Texas, and reports say they are working to identify a man seen in surveillance footage with her.

The woman has not yet been identified.

“Lufkin police are asking for the public’s help with identifying the man in the green next to the accused ‘licker.’ They are verifying her identity before issuing an arrest warrant,” wrote Jessica Willey with ABC13 on her Twitter page.

Another photo of the Lufkin licker has been released. Police said she’s wanted for licking a tub of Blue Bell ice cream at a Walmart in East Texas. https://t.co/y9BSPnoivr #kprc2 #HouNews #Walmart #BlueBell @ILoveBlueBell pic.twitter.com/07nuj8sJE9

In the viral clip, a woman wearing glasses, a maroon top, and black pants is seen licking the ice cream as someone records. More than 12 million people have viewed the clip.

The video drew outrage on social media, with other people saying it was disgusting behavior. “You foul,” says a voice heard off-camera.

Blue Bell Creameries said on July 3 that its staff has identified the carton of ice cream that was licked by the woman, according to the local news website.

The firm said it happened at a Lufkin Walmart, adding that it removed all in Tin Roof-flavored tubs from the location.

“Based on security footage, the location and the inspection of the carton, we believe we may have recovered the half gallon that was tampered with,” Blue Bell said, according to KTXA.

Police in Lufkin, meanwhile, said that detectives obtained the footage and it shows a woman matching the description of the woman in the video.

Officials said they have likely identified the woman, and they added that charges are pending.

“Our biggest concern is consumer safety—in that regard we are glad to see the tainted product off the shelves,” Lufkin Director of Public Safety Gerald Williamson said, according to a Facebook post.

In the post, the police department added that “detectives had obtained surveillance video placing a woman matching the suspect description in the Lufkin store on June 28 around 11 p.m.”

If convicted, the woman could face a second-degree felony charge of tampering with a consumer product, said the Lufkin police department to NBC News.

BLUE BELL LICKER UPDATE: Lufkin police are asking for the public’s help with identifying the man in the green next to the accused “licker.” They are verifying her identity before issuing an arrest warrant. More 👉https://t.co/dYcJV6K4iu #abc13 pic.twitter.com/ngQRJ8EkYX

JUST IN: Police in East Texas believe they have located the store where a woman was seen in a viral video licking a container of Blue Bell ice cream and putting it back in the freezer. #KSATnews https://t.co/9pbHezRJty

“As that portion of the investigation continues, detectives are focusing on identifying the male (in the green shirt) behind the camera seen in images of the two entering the store together,” a police spokesperson also told NBC.