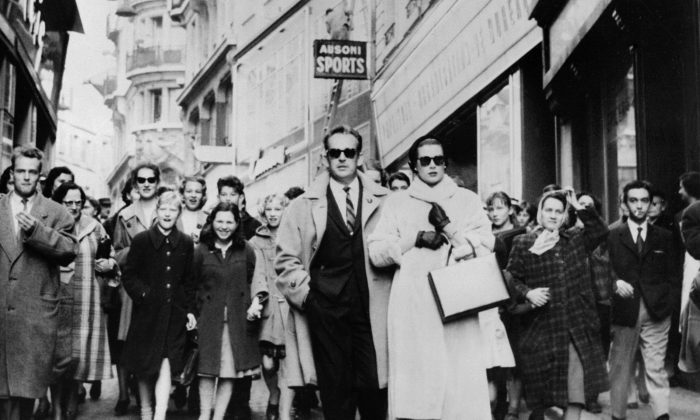 HOLLYWOOD IN MONACO: Grace Kelly and Prince Rainier of Monaco during their wedding ceremony in Monaco, 19 April 1956. Grace Kelly's wedding gown was a gift from MGM studios who contracted the filming of the entire event. (STF/AFP/Getty Images)
Europe

Another Look at Grace, Princess of Monaco

With the death of Prince Rainier Grimaldi III, in April this year, another look is bestowed on the legendary union between one of American’s greatest beauties and a monarch hoping for the survival of his kingdom.

A 1918 treaty between Monaco and France stipulated that Monaco would be recognized as an independent principality as long as the throne was occupied, otherwise the country would revert to France. Ending his six year long love affair with French actress Gisele Pascal, who was said to be barren, Rainier sought to marry and produce an heir to the throne of Monaco.

Grace met Rainier at the Cannes Film Festival in May 1955. Her friends thought it would be spectacular if she and Monaco’s Prince could pose for photographs, which would later be published in Paris Match. A meeting at the Palace was arranged but, on the day, the electricity in Grace’s hotel went down. All of her dresses needed ironing except one large floral number made of non-wrinkle material. Grace hated that dress, which she obviously had along for exactly such emergencies. Having no other choice, she pulled up her still wet, unset hair, and donned the dress.

The Prince, attending to official duties, was 45 minutes late for the meeting, which was considerably uncomfortable for everyone present. The photographer suggested that that they all go out onto the Palace grounds, which broke the ice. Rainier took Grace for a tour of his private zoo beside the pink 235 room hilltop palace.

Rainier is first said to have impressed her by the amicableness with which he petted and played with his tigers. The animals seemed to love him – and this may have been the moment when Grace first loved the Prince.

Though Grace had dated a serious number of Hollywood’s leading men as well as fashion designer Oleg Cassini, she had often told friends that she wanted to marry and have children. When Prince Rainier proposed it was first through his trusted and long time friend Father Tucker, who traveled to America to ask Grace if she would accept Rainier’s hand in marriage.

This was not an act of shyness of the part of Rainier, but a royal custom as Princes did not directly arrange their own marriages. Rainier soon traveled to spend Christmas at the Kellys’ home in Philadelphia; the engagement was made public on January 5th, 1956.

Seventeen years after Grace Kelly’s fatal car accident on the winding hill roads of Monaco, Rainier said, “I still feel her absence. It was a marriage of love.”

From rumors and tabloids, the world has heard about the less-than-easy life assumed by Princess Grace. Trading her film career for royal duties to a foreign kingdom, Grace was said to have suffered from loneliness and a longing for her American lifestyle.

Alfred Hitchcock invited her to film Marnie (1964), and Rainier conceded, but the people of Monaco did not want to see their princess playing a thief and kissing a strange man–Sean Connery. Her films had been banned in Monaco by order of the Prince and after the outcry from the Monegasques, she did not make another movie until Rearranged in 1982, the year of her death.

Despite the hardships of her royal station, Grace’s image put little-known Monaco on the map. Not only was her wedding to Prince Rainier filmed and broadcast by MGM studios, in exchange for release from her acting contract, but through her Hollywood connections to the likes of Frank Sinatra and Cary Grant, Grace brought limelight and glamour to the small principality, transforming it into a playground for the world’s wealthiest.

No other incident speaks as loudly of Grace Kelly as that at the Stork Club in Manhattan. Josephine Baker, who was black, had been refused service. Grace was at the club when this happened and stormed out with her entire party, vowing to never return, and never did.

Grace went on to become a close lifelong friend of Josephine Baker, until her death in 1975, and helped support her orphanage of Rainbow Coalition Children. When Josephine Baker suffered from abuse, Grace Kelly coached Josephine’s return to the stage.

Grace Kelly’s own philanthropic work speaks most directly about her role as a Princess. She was an avid supporter of the Red Cross, though most of her efforts were poured into Monaco’s orphans for whom she established an orphanage. Every year, the Princess would have a Christmas party with presents for the children. No adults were invited.

The eyes of the world have not tired of Princess Grace of Monaco. She leaves with us her beauty, style, and of course unmatched grace.