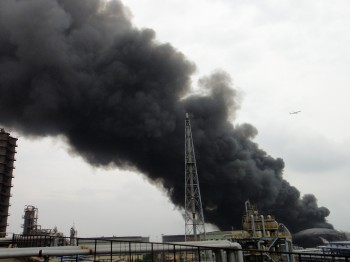 Another Fire at PetroChina Refinery in Dalian Has Citizens on Edge

A huge fire at China’s state-owned PetroChina Co. refinery in northeastern port city of Dalian has disaster-weary residents on edge, about yet another environmental threat. “We don’t know where to escape to; if there’s a big explosion, the city will blow up too,” one worried resident told The Epoch Times.

Chinese media reported that a diesel storage tank containing 800 tons of fuel caught fire in the morning of Aug. 29, sending a huge, black billow of toxic smoke into the air. The blaze continued for about three hours before firefighters managed to put it out.

The reports also said that the fire was caused by static electricity generated by workers operating the tank, and that the tank was among many other storage tanks.

Mr. Chen, a local man who witnessed the fire, told The Epoch Times that the blaze started around 10 a.m., with billows of thick smoke covering half the sky until 12:30 p.m.

He said he was frightened because there are countless storage tanks with finished crude oil in the refinery owned by PetroChina.

“It’s very dangerous. I can’t imagine what would happen if they exploded,” Chen said.

He also said that there’s a strong smell of liquid gas in the air.

Mr. Li, another Dalian resident, also said that he was really worried. “The area is full of oil storage tanks. If they exploded, the city of Dalian would also explode and be completely destroyed,” he said.

PetroChina is China’s biggest oil producer. This is the fourth fire that has happened in PetroChina’s Dalian storage depot since July 2010. A fire broke out in the same refinery on July 16. Last year two fires, one in October and the other in July, broke out in another facility in Dalian. This is also the fifth major environmental disaster to hit the city.

In July a typhoon breached a dike protecting the Fujia Dahua Petrochemical Company in Dalian’s port that triggered a mass protest by citizens fearing highly toxic paraxylene pollution. Tens of thousands of residents took to the streets on Aug. 14 to demand the shutdown of the chemical plant. The mass protest was the largest in northern China since the 1989 Tiananmen Square student protests.

Several Dalian residents told The Epoch Times that they are worried about living in Dalian as oil refineries and chemical plants are allowed to be established near the densely populated urban area.

“We don’t know where to escape to; if there’s a big explosion, the city will blow up too,” one resident said.

“They have not yet resolved the paraxylene problem, and now we are hit with another fire,” another resident said.

The Epoch Times contacted the Environmental Protection Bureau in the Gangjingzi district, where the refinery is located, to inquire about air pollution concerns caused by the fire, and was told that people should go by whatever the media says.

Another call to the Emergency Office of Dalian produced even less information. Asked about any safety concern in relation to the fire, the office staff said they “decline to respond to any questions.”