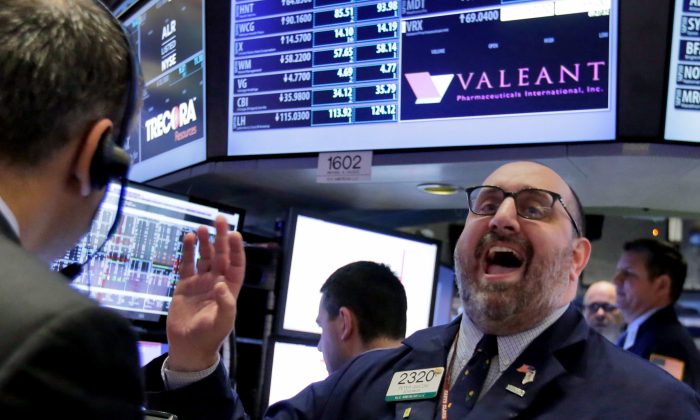 Specialist Peter Giacchi calls out prices at the post that handles Valeant Pharmaceuticals on the floor of the New York Stock Exchange, Tuesday, March 15, 2016. (AP Photo/Richard Drew)
US

Another Drug Company in the Crosshairs of Congress

NEW YORK—Another pharmaceutical company is being targeted by lawmakers over drug pricing.

Shares of Medivation tumbled more than 6 percent in premarket trading Tuesday after a group of lawmakers opened a campaign to potentially lower the price of its prostate cancer drug.

Reps. Lloyd Doggett and Peter Welch and Sen. Bernie Sanders urged the Department of Health and Human Services and the National Institutes of Health to step in to cut prices for the drug Xtandi, saying it costs four times more in the U.S. than it does outside the country.

They are asking for public hearings over the drug, which they say was developed at the University of California, Los Angeles, through taxpayer-supported research grants. It is sold by Japanese drug maker Astellas Pharma.

The lawmakers want the NIH to consider overriding Xtandi’s patent in hopes that the price of the drug will fall.

Medivation is just the latest drugmaker to find itself in the crosshairs of Congress.

The CEO of beleaguered Valeant Pharmaceuticals Inc. was subpoenaed Monday to appear before a congressional committee, its third hearing since December, to determine the reasoning behind the skyrocketing price for drugs.

Executives at Valeant, Turing Pharmaceuticals and several other drugmakers have been buying up rights to those old drugs and then jacking up prices many times over what patients had paid for years.

Executives of the companies have been invited or subpoenaed to testify at hearings on the issue held by multiple Congressional committees.

Medivation Inc., based in San Francisco, did not immediately respond to a request for comment. Its stock dropped $2.55 to $38.70 before the market open.