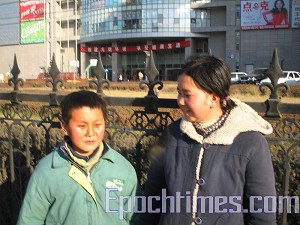 Another Difficult New Year Ahead

A disabled appellant Cao Fuling from Lingtai County, Gansu Province and his three children have been appealing in Beijing for almost seven years. Cao's oldest daughter was kidnapped by the local authority in 2006; her whereabouts are unknown to this day. Cao hopes the government will help find his missing daughter and let the children attend school soon.

Cao Fuling filed a lawsuit in court against fellow villager Cao Xiaojun for robbing his money meant for medical treatment. In 1998, the court ruled in favor of Cao Fuling but did not enforce the return of the money. Although he asked the Lingtai County court for the money several times, the assistant head of the court Wang Ligong not only rejected his request but also beat up and injured him.

Cao Fuling's wife died from a medical incident and left three young children behind. The family of four was impoverished. When he failed to obtain assistance locally, he went to Beijing to appeal.

The local government tricked them into returning home by telling them that the problems would be resolved. The family then returned home. 1

In 2002, they went to the court seeking for help again; all four family members were detained at the court for 18 days. Cao Fuling was later sentenced to two years in prison for “obstructing public affairs.” During his incarceration, his three children could not attend school and roamed about begging for a living.

Now Cao Fuling's second daughter Cao Yuxia is already 13 years old, the youngest son Cao Xiaolong is 10 years old. Through following their father in making appeals for several years, they can recite their case and appear to be more mature than children their same age.

Cao Yuxia said, “My father is disabled from beatings and was sentenced to two years imprisonment. My sister was kidnapped. We have no relatives in our hometown, our grandmother also died from oppression. Because of father's disability, he is unable to till the land to make money, so we stopped attending school a long time ago.”

Cao Xiaolong said, “One evening in 2005, someone stole our materials used for making appeals from my father. They used towels to cover our mouths to stop us from calling for help, and then all of us, without shoes, were dragged into a car.”

After Cao Fuling was released from prison, he went to the local government again to resolve problems, and also hoped to resolve his children's schooling problem. The department in charge told him, “This problem is caused by the court, ask the court to resolve your problem.”

In December 2006, the local government hired thugs to kidnap Cao's son and daughter Cao Yuxia and Cao Xiaolong. They detained them for seven days and refused to tell Cao Fuling their whereabouts. Cao Fuling and his oldest daughter looked all over Beijing for them; the oldest daughter was subsequently abducted also.

Where's Our Sister—Passing the Buck

Cao Yuxia and Cao Xiaolong said, “We miss our sister very much, we have nothing to eat, we sleep on the streets and are unable to attend school. We hope some kind hearted people will help us, so we can go back to school.”

(1) All provinces have offices in Beijing. They have security forces and hire thugs to locate appellants from their own province and repatriate them back home to avoid embarrassment in China's capital city.