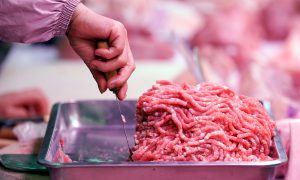 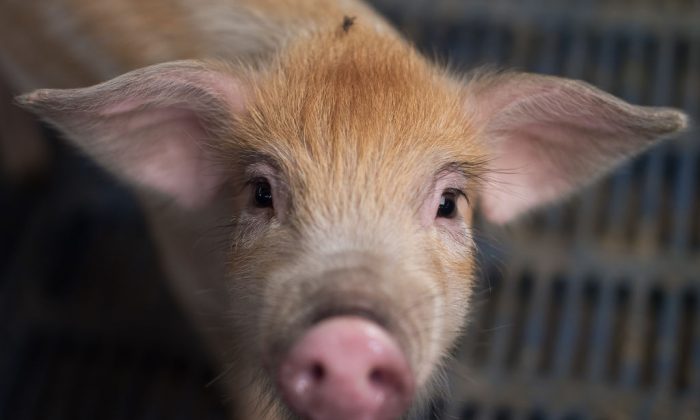 A piglet at a pig farm on the outskirts of Beijing.(NICOLAS ASFOURI/AFP/Getty Images)
China

A dead pig infected with the African swine fever virus drifted ashore onto the southwestern side of Lieyu, a rural island administered by Taiwan’s Kinmen County, on March 12. Kinmen is the name of a group of islands located southwest of the main Taiwan isle.

Lab tests confirmed that this was the third pig that tested positive for swine fever virus to have washed up on the shores of Kinmen since December.

The Central Emergency Operation Center of Taiwan, Swine Fever Division, announced on March 14 that gene fragments from the dead pig was 100 percent identical to the swine fever strain found in affected pigs in mainland China, home to an ongoing outbreak of the disease.

African swine fever (ASF) is highly contagious and fatal to pigs, though it has no known harmful effects on humans. China has reported 112 outbreaks of ASF in 28 provinces and regions since August last year. About one million pigs have been culled in China so far in an attempt to control the spread of the disease, according to a Reuters report.

According to the Central Emergency Operation Center, the dead pig was found only about 6 kilometers (3.7 miles) away from Xiamen City in China’s Fujian province—an area located directly across the strait from Taiwan.

The Kinmen county government has been taking strict measures to prevent further spreading of the virus. In addition to disinfecting personnel, vehicles, and equipment, Kinmen is also monitoring the eight family-owned pig farms in Lieyu Township. So far, no abnormal situation has been found on these pig farms.

Pigs and pork products from Liehyu Township are currently suspended from entering the main Kinmen island. The suspension may be lifted when local pigs have completed the African swine fever testing and results come up negative.

Previously, two other pigs with swine fever virus had drifted onto the shores of Kinmen. The county government also suspected they originated from mainland China, as local pig populations were healthy. One was found on December 30, 2018 on the shore of Tianpu, Jinsha Town, Kinmen County,  the other was found on Jan. 17, on the shore of Chukuang township in the Matsu Islands.

Also on March 14, Taiwan’s Central Emergency Operation Center announced that one more pork product from mainland China was found to have tested positive for ASF. This brings the total number of ASF-contaminated pork products found in Taiwan to 32.

The most recent case was pork jerky that was discarded at the Kaohsiung Siaogang Airport by a passenger flying back to Taiwan from Fuzhou City in Fujian Province. The pork jerky was made in Linyi City in northern China’s Shanxi Province. The Kaohsiung airport collected it and sent it to the Airport Quarantine Station for testing.

The Central Emergency Operation Center stressed again that passengers are not allowed to carry pork products from China into Taiwan, as the risk of spreading ASF to Taiwan is very high. Offenders will be severely punished, with a minimum fine of  NT$200,000 ($6,479).