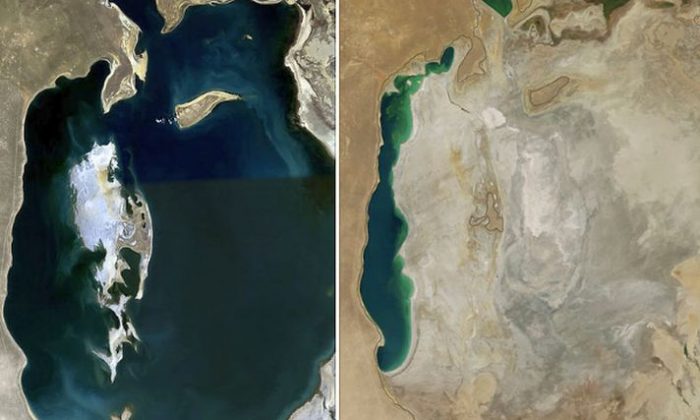 Another Communist Tragedy: One of the World’s Worst Ecological Disasters

The Aral Sea, once the fourth largest lake in the world, has almost completely dried up—but it’s mostly a man-made phenomenon, described as “one of the planet’s worst environmental disasters.”

Originally, the lake covered 26,300 sq miles between Kazakhstan and Uzbekistan. However, it’s been steadily shrinking since the 1960s after Soviet irrigation projects diverted rivers that fed into it, splitting it into four, much smaller lakes.

Now, only 10 percent of the original lake still exists, according to Scientific American.

Recent NASA satellite images revealed its untold destruction, showing that the entire eastern portion had completely dried up. The eastern portion is now officially called the Aralkum Desert. According to the U.S. space agency:

By 2001, the southern connection had been severed, and the shallower eastern part retreated rapidly over the next several years. Especially large retreats in the eastern lobe of the Southern Sea appear to have occurred between 2005 and 2009, when drought limited and then cut off the flow of the Amu Darya. Water levels then fluctuated annually between 2009 and 2016 in alternately dry and wet years. In 2014, the Southern Sea’s eastern lobe completely disappeared.

As the inland “Sea of Islands” disappeared, it decimated the industry along its former banks. Unemployment and economic hardship for many fishermen and others are commonplace, while the region is heavily polluted, triggering serious public health issues.

According to UNICEF, in the erstwhile Aral fishing industry, some 30,000 were employed. Now, the broken-down, rusted-out hulls of ships—deposited during the lake’s rapid disappearance—are strewn about the basin as reminders of poor central government planning. In the Aralkum Desert, one can take in the bizarre spectacle of a camel grazing next to a graveyard of boats.

Communist planners had the not-so-brilliant idea to divert the Amu Darya and Syr Darya to irrigate a nearby desert to grow cotton, which only worked for a short time before an ecological catastrophe followed. It was part of Joseph Stalin’s “Great Plan for the Transformation of Nature” for land development that started in the latter half of the 1940s.

“You can’t see salt in the air, but you feel it on the skin, and you can feel it on a tongue,” said a local woman to Russian state broadcaster RT, referring to the health problems of people who live around the former sea.

One resident told UNICEF about the first time he remembered the waters receding.

“We started noticing a change in the waters around the 60s” the local said.

“The water used to come here when we were at the shore,” he added, pointing to his chest area. “And then slowly by slowly it began going down. By the 80s the sea was gone from here.”