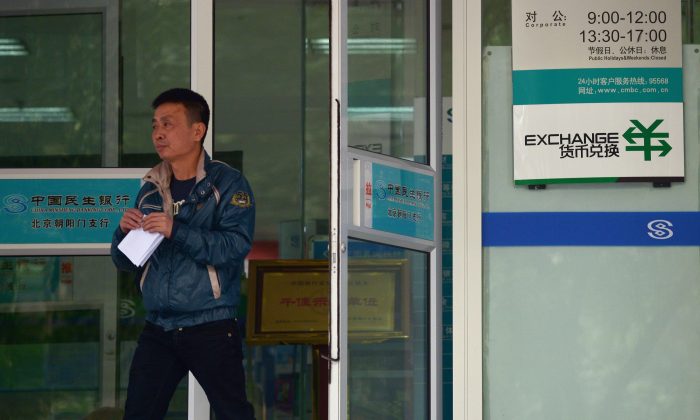 In this file photo, a man walks out of a bank in Beijing on October 31, 2013. New rules will require foreign technology companies that serve banks in Beijing to provide their source code and put backdoors in their software. (Wang Zhao/AFP/Getty Images)
Epoch China Blog

Another Brick in the Wall: China Demands Source Code and Back Doors for Bank Computers

New York Times quoted from a copy of the rule document received by foreign technology companies that do a large amount of business with China, saying that 75 percent of technology products used by Chinese institutions must be classified as “secure and controllable” by 2019.

In response, 18 U.S. business groups including the U.S. Chamber of Commerce and AmCham China, wrote a joint letter to the Chinese cybersecurity office, appealing for a postponement of the implementation of the new rules, which would harm cybersecurity and the global market.

“An overly broad, opaque, discriminatory approach to cybersecurity policy that restricts global internet and ICT products and services would ultimately isolate Chinese ICT firms from the global marketplace and weaken cybersecurity, thereby harming China’s economic growth and development and restricting customer choice,” the letter read, according to the BBC.

The letter urges “urgent discussion and dialogue” because of a “growing trend” that companies are required to use only technology products and services developed and controlled by Chinese companies, New York Times said.

Chinese cyber expert Gu Chuan, a visiting scholar at Columbia University in New York City, indicated that the most fundamental purpose of the CCP is to control freedom of speech and internet freedom in China, according to New Tang Dynasty television.

Gu added that the additional effect of the cybersecurity control is to ensure that Chinese technology companies develop and occupy the Chinese market. Under the increasing cyber control of the CCP, Google is a typical example of companies that left China due to its unwillingness to accept the internet censorship of the CCP, Gu said. After Google’s withdrawal, Chinese web service company Baidu, under the control of the CCP, became the leader of the market.