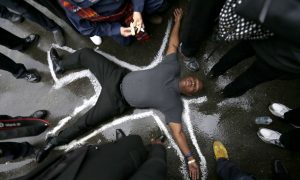 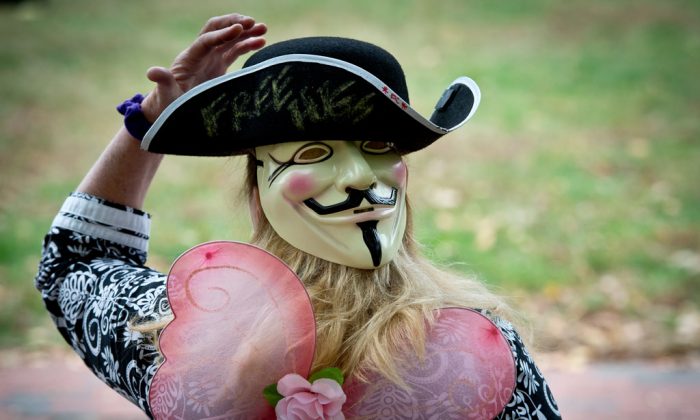 A supporter of the group Anonymous in front of the White House in Washington, D.C., on Nov. 5, 2013. (Mladen Antonov/AFP/Getty Images)
US

As cities around the nation prepare for reactions to the Ferguson grand jury decision over whether to indict police officer Darren Wilson for his Aug. 9 killing of Michael Brown, a cyber drama is playing out between a 21st century and a 19th century group.

Anonymous versus the Ku Klux Klan is a subchapter in a larger story of life and death, race, justice, and history. As Occupy Wall Street tweeted: “Anonymous declares cyberwar on the KKK for threatening Ferguson protesters with physical violence. Operation KKK: #OpKKK

The group of nameless hackivists responded to a flier the Traditionalist American Knights of the KKK distributed in Ferguson. The flier threatens protesters with “lethal force” and says in part “You have been warned by the Ku Klux Klan! There will be consequences for your actions against the peaceful, law abiding citizens of Missouri.”

Anonymous began posting the faces, names, workplaces, and IP addresses (a unique identifying number for a computer) of what it says are local Missouri members of the KKK. Some were law enforcement officers. It tweeted, “This is a direct message to you KKK. You messed with us, now it’s our turn to mess with you.”

The irony is vivid because just as the KKK hides under its white hoods, so does Anonymous hide on the Internet. The loosely-knit group has also mounted denial-of-service attacks against KKK web sites.

Klan members made threatening phone calls to a woman who posted information about the incident, according to the recipient.

Tiffany Willis, founder and editor-in-chief of website Liberal America, wrote a story about the KKK flyer and Anonymous’s efforts on Saturday. She wrote, “I had a couple of interactions on Twitter and the story did moderately well on the site, but imagine my shock when I left my phone for a few minutes and came back to a voicemail from a blocked caller — a guy claiming to be the KKK.” She posted the audio on her site.

Willis wrote that she was not afraid, but her children were. Another ostensible KKK caller then made a follow-up call to reassure her, she said on her website.