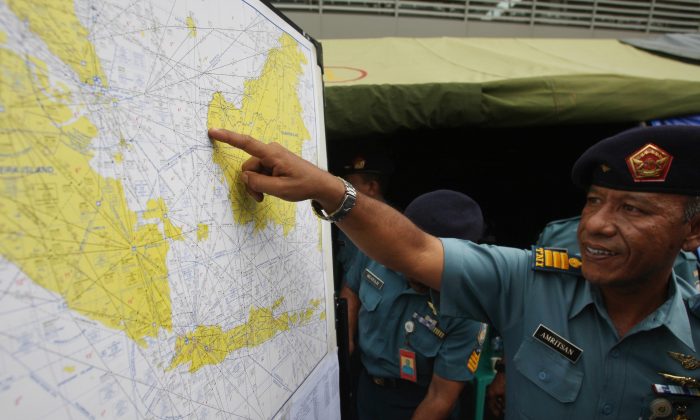 A military personnel points to a map of Indonesia at the crisis center set up by local authorities in search of the missing AirAsia flight QZ8501 at Juanda International Airport in Surabaya, East Java, Indonesia, Monday, Dec. 29, 2014. Search planes and ships from several countries on Monday were scouring Indonesian waters over which an AirAsia jet disappeared, more than a day into the region's latest aviation mystery. AirAsia Flight 8501 vanished Sunday in airspace thick with storm clouds on its way from Surabaya, Indonesia, to Singapore. (AP Photo/Trisnadi Marjan)
AirAsia Disaster

An anonymous Chinese blogger allegedly predicted an AirAsia plane would be taken down by a shadowy organization over a week before the company’s Flight QZ8051 vanished en route to Singapore.

The blogger said in a series of posts which have since gone viral and been viewed around one million times that AirAsia would be targeted by a sketchy group he refers to as the Black Hand.

A translation of the posts by a Reddit user says that the term is a metaphor for a shadowy organization that does its work behind the scenes.

“Black hand has hijacked and shot down MH370 and MH17. This has pretty much killed the 6th largest airline: Malaysian airline. Now the black hand are targeting AirAsia to ruin this airline cause it too belong to Malaysia,” the blogger warned.

“Given how powerful the black hand are I suggest that all Chinese thinking about traveling to avoid AirAisa, so that you don’t disappear like those on MH370. You could be happily vacationing, working, or studying aboard, but if you go on Malaysian airline or AirAsia you’re dead, be careful.”

The blogger, who was calling himself the landlord, later posted again, urging people not to fly on AirAsia. “If you do not listen you will get in an accident, and it will be too late to regret,” he said.

In another post two days later, on December 17, the user added: “This is a major event in human life, we have to pay attention.” The user ultimately posted 39 times with similar messages.

After Flight QZ8051 vanished on December 26, the series of posts started circulating widely, with some users saying they believe the user somehow obtained insider information and was indeed warning people. Some guesses about the user’s identity include a hacker or an intelligence agent.

Others, though, say the forums on which he posted can be manipulated, and that the dates and times of the posts actually occurred after the disappearance.

Meanwhile, multiple countries are still searching for the missing plane, which vanished after it departed from Indonesia.