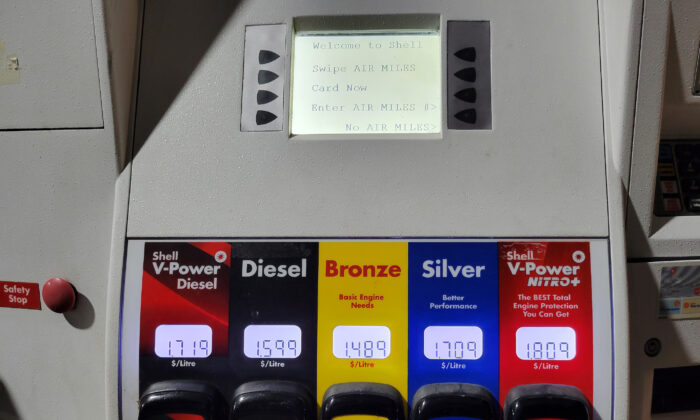 Gas prices are displayed at a Shell station in Newcastle, Ontario, on Feb. 2, 2022. (The Canadian Press/Doug Ives)
Canada

OTTAWA—The annual pace of inflation has topped five percent for the first time in more than 30 years.

The annual inflation rate rose to 5.1 percent in January compared with a gain for 4.8 percent in December, Statistics Canada reported Wednesday.

Driving much of the increase in January were prices for housing, gasoline and groceries.

Gasoline prices were up 31.7 percent last month compared with January 2021, with the backdrop of mounting concerns over global oil supplies linked to the threat of Russian military action against Ukraine.

Excluding gasoline prices, Statistics Canada says the annual rate of inflation would have been 4.3 percent in January, which the agency notes is the fastest pace it has on record.

Prices for groceries increased year-over-year by 6.5 percent for the largest yearly increase since May 2009. The agency notes that prices for beef, chicken and fish all rose faster in January compared with December, while margarine and condiments were up by double-digits compared with January 2021.

Royce Mendes, managing director and head of macro strategy at Desjardins, said inflation is set to accelerate even further with energy prices continuing to rise.

The inflation report this morning comes exactly two weeks ahead of the Bank of Canada’s next scheduled interest rate announcement.

The central bank has kept its key policy rate at 0.25 percent since the onset of the COVID-19 pandemic in March 2020, but recently dropped its promise to hold the rate at emergency levels.

The bank is widely expected to raise rates as part of the March announcement in what’s likely the first of several hikes over the course of the year designed to cool inflation.

The average of the three measures for core inflation, which are considered better gauges of underlying price pressures and closely tracked by the Bank of Canada, was 3.2 percent for January, up from the 2.93 percent reported in December.

Statistics Canada says that was the fastest pace recorded since August 1991.