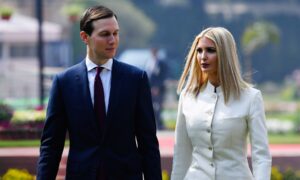 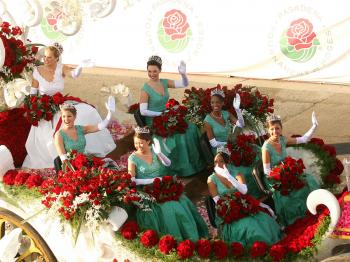 The Rose Queen & Royal Court float members wave on the parade route at the 118th Tournament of Roses Parade on January 1, 2007 in Pasadena, California. (Frederick M. Brown/Getty Images)
US

Holding this festival to spread the word about California dates back to the 18th century and attracts millions of spectators and television viewers each year on New Year’s Day to watch school marching bands, equestrian groups and dozens of floats lavishly decorated with rose flowers.

And this year The Pasadena Tournament of Roses named Natalie Anne Innocenzi the 92nd Rose Queen.

A drawn out process which began a month ago, selected sixteen-year-old Queen Natalie among more than 1,100 women from California, according to event organizers.

Queen Natalie and six Rose Princesses among others are expected to be in the center of this year’s festivities, culminating with the annual Rose Parade, an event watched by millions of television viewers nationwide.

Natalie was picked based on a combination of qualities, including public speaking ability, poise, academic achievement and community involvement, according to organizers.

"They (Rose Queen Natalie Innocenzi and the six princesses) are talented, graceful and stellar," said Tournament of Roses Acting President Jeff Throop. This year, the event will feature the 96th Rose Bowl Game.

Natalie Anne Innocenzi, 16, is an Arcadia, Pasadena-area, California resident and a senior at Flintridge Sacred Heart Academy. She is president of her school's Amnesty International Club and a member of the board for the Alzheimer's Foundation of America Teens. Natalie started an Alzheimer's Awareness week at her school.