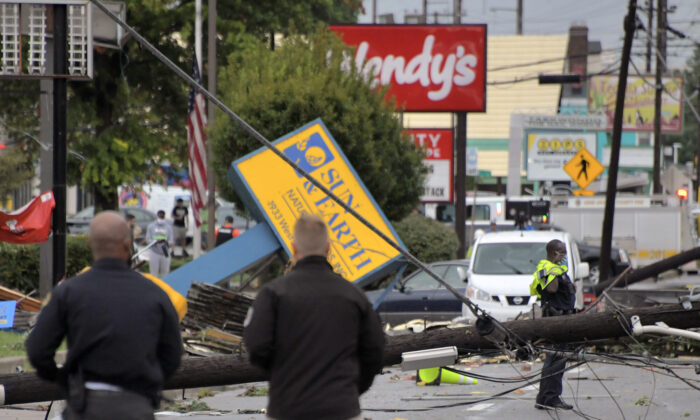 Damage in the 1900 block of West Street following a tornado that swept through the Annapolis, Md., area, as the remnants of Tropical Depression Ida continued to trail across the state, on Sept. 1, 2021, (Karl Merton Ferron/The Baltimore Sun/TNS)
US News

By Lilly Price and Christine Condon
From The Baltimore Sun

Annapolis Mayor Gavin Buckley and Anne Arundel County Executive Steuart Pittman have declared states of emergency as business owners and residents started assessing damage and cleaning up after a tornado tore through the area Wednesday.

BGE reported 959 Annapolis customers were still without power early Thursday afternoon, the city said. As Gov. Larry Hogan toured the damage in Annapolis and Edgewater earlier Thursday morning, he said more than 6,600 homes in Maryland, most in Anne Arundel County, were without power.

The tornado hit Annapolis’ West Street, leveling businesses and taking down power lines in its path across the South River into the Child’s Point area before crossing Aris T. Allen Boulevard to the Parole community, which was hardest hit, according to the county.

South of Annapolis, in Edgewater and the surrounding areas, residents’ homes had roofs fly off and trees downed.

The sort of damage observed in the Annapolis area can require wind speeds of 100 to 140 mph, according to National Weather Service indicators of tornado damage. That could indicate a tornado as strong as EF-3 on the Enhanced Fujita scale, which ranges from 0 to 5.

Two commuter bus routes will not service local stops in Annapolis along West Street as a result of the tornado damage, the Maryland Transit Administration said.

The stretch of West Street from Chinquapin Round Road past Gibraltar Avenue was expected to remain closed through lunchtime Thursday, according to the city.

Hogan joined Buckley in Annapolis after he looked at damage to a stadium at South River High School in Edgewater and another school nearby this morning. The streetlights were still without power in the area near the school but cleanup had begun in Edgewater and Annapolis.

Followed by a gaggle of reporters, Hogan, Pittman, and school officials walked through the South River track where the tornado blew through and took with it a piece of the stadium’s concession stand. It dropped the rafter on the top of trees on its path to West Street. The first football game of fall was supposed to be played there Friday but has been relocated to Severna Park.

Windows at CAT South, near South River, were blown out by the storm. The center for applied technology sustained mostly cosmetic damage. Neither school had structural damage.

Hogan, who saw Wednesday’s storm cloud roll in from the statehouse, said Thursday the state would do everything it could to assist Anne Arundel County and local governments in recovery efforts. Pittman declared a state of emergency in the county, the first step toward applying for state aid, he said. State and county emergency management staff are still assessing the storm damage Thursday afternoon.

The storm would have to reach a threshold of $9 million in damages to be eligible for relief from Federal Emergency Management Agency, Pittman said.

Amos Johnson, 69, was sitting at his kitchen table when he saw the funnel twirling through Hillcrest Memorial Gardens behind his home. The tornado danced across the open field, he said, as leaves churned around the cloud.

“I ran to the basement, laid on the floor and prayed,” he said.

While the tornado damaged numerous homes on its way to West Street, Johnson said he counts himself lucky. His roof, which he replaced last August due to storm damage, was intact. Not even a shingle was out of place.

But Thursday morning, his yard was covered in tree branches and leaves. His garbage cans, and even a metal wood splitter, had been tossed from one side of the yard to another. The umbrella on his porch was nowhere to be found.

Thursday morning brought a trip to the gas station so he could fuel up his chainsaw and start clearing the branches encircling his backyard shed, where he was met with a long line of residents, likely doing the very same thing.

“I got a lot of cleaning up to do. I’m not anxious to get started,” he said, Starbucks coffee cup in hand.

While touring West Street, Buckley announced the city and county set up a resource center at Mount Olive Community Life Center, on 2 Hicks Avenue to assist residents affected by the storm with insurance applications and other relief. The center is open from 2 p.m. to 8 p.m. Thursday.

“Our partners at the county and the state will be crucial to assist residents in the cleanup,” Buckley said. “We are thankful that there were no fatalities and no reported injuries. The fact remains we have a lot of work ahead of us.”

The city’s Department of Planning and Zoning building inspectors have determined there are 38 people displaced with 3 buildings destroyed, 24 condemned buildings, 26 structures with major damage, and 49 buildings with minor damage. The numbers are expected to rise as inspectors continue their work on Thursday.

Dre Kyler said he was driving in his work truck on West Street when the tornado struck Wednesday. He watched as a McDonald’s sign was flung aside by a gust of wind, then the sign for the Sun & Earth natural food store.

He said he threw his truck into reverse, and pulled into the Annapolis Gardens townhome complex on Bowman Court where his mother and uncle live.

Finally, when the winds stopped, he rushed inside.

Thursday morning, much of the complex was still without power, and parts had been roped off with caution tape. As workers repaired torn siding and gaping holes in roofs around the complex, and swept up leaves and branches, Kyler was surveying the damage to his uncle’s Oldsmobile. Most of its windows had been shattered in the storm, including its back windshield.

Kyler’s Jeep didn’t fare much better. A tree branch dented part of its roof, and smashed the driver’s side windows.

Walter Vasquez stood in ankle-high water collected inside his freshly painted store on West Street Thursday. As the owner of the new and popular Annapolis International Market, Vasquez was preparing to add a butcher shop and paint a mural out front. But after Wednesday’s tornado blew a hole in his store’s roof, those plans are delayed while he’s forced to close its doors for at least a month.

Vasquez watched from his car across the street when the tornado spun into his store and threw his commercial sign into the street in seconds. His employees were screaming when he returned to the store to pick them up, he said.

Hogan stepped inside the market Thursday to survey the damage to Vasquez’s business. Vasquez said he put most of his savings into the market and the Sin Fronteras food truck behind it. He remains optimistic that he and his seven employees will be able to quickly rebuild the 8-month old store.

“As soon as they say it’s safe again we got to start back to work. I have a commitment to my employees. They were selling stuff, now they’ll start building stuff,” Vasquez said. “It’s going to be the best store in this area, eventually.”

Walking through the Parole Street neighborhood off West Street, Pittman credited Department of Public Works crews that worked through the night and Thursday to restore power and gas..

Doretha Scott, 68, was raking leaves and branches into a garbage bag Thursday afternoon outside her home along Forest Drive, as the damage to her property was starting to sink in.

Bricks from her chimney were torn off, and plowed onto the hood of one of the family’s cars, sending a spiderweb of cracks through the front windshield.

A historic car that Scott’s son was working on was badly dented, too. Chunks of siding were pulled from the front of her house, and a downed tree caved in her screened-in porch.

“I was just shocked to the point that I was numb,” she said. “It was done. There was nothing you could do.”

Scott said she never saw the tornado, but she heard it. The incredible rumble was enough to send her and her family for the basement. Her neighbor’s entire roof was lifted from its home.

She’s made a few calls about covering the damage, but said she’s waiting for some of the dust to settle.

“Once it sunk in what had happened, this morning we’re just taking it slow,” she said. “Just giving it a little bit of time.”