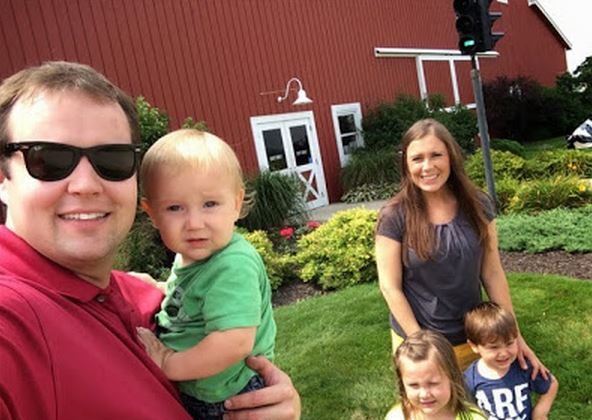 Anna Duggar and Josh Duggar are not pregnant with their fourth child, they revealed in the 19 Kids and Counting episode that aired on November 11, but they do hope to be soon.

Josh, 26, is the oldest child of Jim Bob and Michelle Duggar, who are famous for having 19 children.

The family was featured on the TLC episode, traveling from their Washington, D.C. home to Chicago to visit Anna’s sister.

They took an RV and stopped at a number of places along the way, including the Indianapolis State Fair.

They also stopped at a dairy farm, where they saw a cow deliver a calf inside a birthing center.

Watching the birth sparked a discussion about a fourth child. Both parents would like another one, with Anna especially enthusiastic.

Anna said that watching the birth, though, made her have second thoughts.

We’re having a blast on #DCDuggarsHitTheRoad – our first family RV trip from DC to Chicago! #19Kids

“I definitely want to have more children but watching the momma cow in labor made me thankful that I wasn’t pregnant yet,” she said.

“But then when you see the birth, the fresh new life, it’s just like, ‘Aww, that calf is so cute.’ But babies are even better, hint, hint!”

She also took the time to clarify that she is not currently pregnant. But based on the birth pattern in the family so far, she may get pregnant soon.