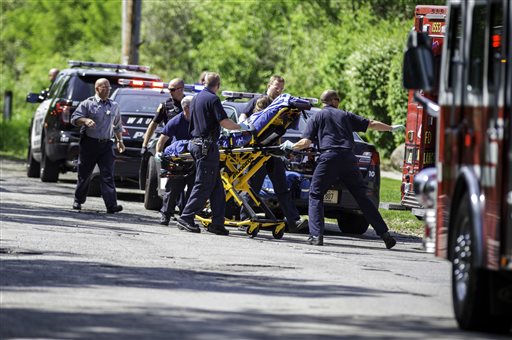 Anissa Weier is one of two 12-year-olds who are accused of trying to stab a friend to death.

The criminal complaint said that Weier and Morgan Geyser had become enamored with the fictional character Slenderman and had decided to kill their friend in order to prove their worth to him.

Slenderman, often depicted as a tall and thin man wearing a suit, is believed to have originated online several years ago.

Weier and Geyser planned for months to kill their friend, who attends the same middle school as them. They ultimately decided to tape her mouth shut, stab her in the neck, and then run away to Slenderman’s mansion, which they believed was in northern Wisconsin.

They attacked the girl in Waukesha on Saturday. Geyser stabbed the victim 19 times.

A bicyclist found the victim lying on the sidewalk and covered in blood, where the suspects had left her.

She was rushed to a hospital where she was in stable condition but still in danger of dying.

Weier told police that she told the victim to lie down and be quiet, so she would lose blood more slowly, reported the Journal Sentinel.

Asked if she knew what it meant to kill someone, Weier said “I believe it’s ending a life and I regret it.”

Both girls were charged as adults with first-degree attempted homicide Monday in Waukesha County Circuit Court; they each face up to 60 years in prison if convicted. A court commissioner set bail at $500,000 cash per child.

“I recognize their young ages but it’s still unbelievable,” Court Commissioner Thomas Pieper said during one of the girls’ initial court appearances Monday.

“It’s extremely disturbing as a parent and as chief of police,” Waukesha Police Chief Russell Jack said at a news conference ahead of the court appearances Monday.

One of the girls’ attorneys, Donna Kuchler, asked Pieper to remove reporters from the courtroom Monday because she planned to attempt to get her client waived into juvenile court, but Pieper refused. Kuchler escorted the girl’s family out of the courtroom, telling reporters only that the family was horrified at what happened.

The other girl’s attorney, Joseph Smith Jr., declined to comment.

Both girls are due back in court on June 11 for a status conference.