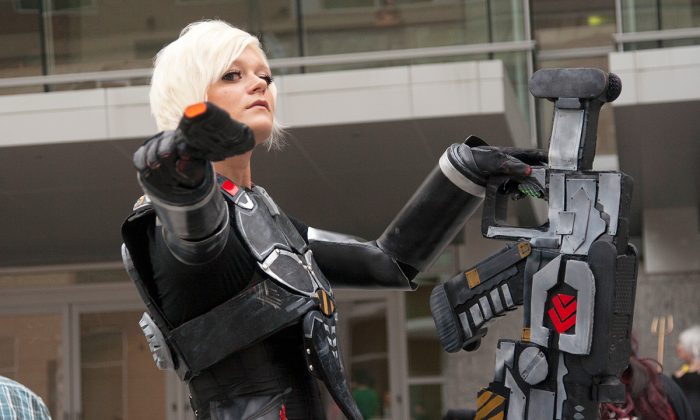 An anime fan models as an animated science fiction character at the 16th annual Animazement convention in Raleigh, NC on May 24, 2013. (Derek Padula)
Entertainment

Animazement Opens its Doors for 2013

Japanese pop culture and anime fans excitedly rush through the open doors of Animazement in Raleigh, NC on Friday, as the annual 3-day anime convention starts again for its 16th year. Attendees of Animazement experience exclusive anime screenings, panels and signings with special guests from across Japan and the United States.

Industry guests include leading anime publisher FUNimation, here to announce their most recent and upcoming releases to the eager audience of fans. A huge selection of official merchandise is available, and amateur anime enthusiasts also sell their own art and costume accessories in the Artist Alley.

Animazement is a completely fan-run and volunteer driven convention, and is one of the largest on the East Coast of the United States. Other activities include cosplay chess, a manga reading room, a masquerade ball, and video gaming.

The doors officially open at 9am on Friday morning, and close Sunday night at 6pm.

If you’re into anime, manga, or Japanese pop culture, then dress up as your favorite character and come on down.