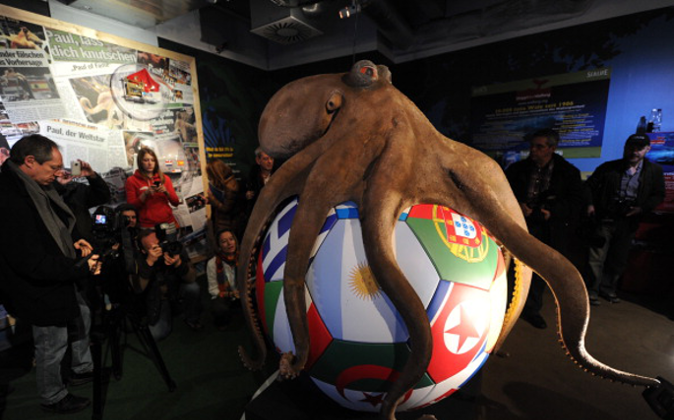 The memorial of Paul the octopus is presented on January 20, 2011at the Sea Life Aquarium in Oberhausen, western Germany. The tentacled tipster was honoured with a 'Paul Corner' at his former home 3 months after his death, containing his ashes and a 'huge memorial'. Paul the octopus, who shot to fame during the 2010 football World Cup in South Africa for his flawless record in predicting game outcomes, died in October 2010. AFP PHOTO / PATRIK STOLLARZ (Photo credit should read PATRIK STOLLARZ/AFP/Getty Images)
Soccer

For the Betting Man: Four Animal Oracles of the 2014 World Cup

A betting man? Based on Paul the Octopus’s roaring success during the last World Cup, basing your bets off an animal oracle is an interesting, yet potentially rewarding route to take.

Paul is no longer alive to cover this year’s 2014 World Cup, but a slew of other critters have risen to follow Paul’s footsteps. Below are each of them listed, along with their track records.

Big Head is host country Brazil’s selected oracle. Hence, Big Head has only been predicting matches involving Brazil thus far. It hit on Brazil’s victory over Croatia, but incorrectly forecasted a Mexican victory on Day 6(this match was a draw).

Also known as “Predictaroo”, Flopsy is an Australian Zoo resident. You can follow Flopsy’s predictions on Twitter at @Predictaroo.

Flopsy has predicted 5 games thus far: Brazil vs Croatia, Germany vs Portugal, Spain vs Netherlands, Australia vs Chile, and Australia vs Holland.

Bold are the hits.

Since the World Cup started, Shaheen has been making daily predictions. Again, bold are the hits:

Brazil vs Croatia, Spain vs Netherlands, England vs Italy, Argentina vs Bosnia and Herzegovina, Germany vs Portugal, Brazil vs Mexico*.

An asterisk is marked next to the Brazil/Mexico match, as that match was a draw, which Shaheen didn’t have an option to predict. In other words, he would have gotten it wrong either way.

Though it’s disappointing the possibility of a draw wasn’t taken in account, we will discount that match in Shaheen’s track record.

Nelly has previously had a great track record, reportedly going 30/33 on predictions involving matches in the 2006 Women’s World Cup, 2010 World Cup, and Euro 2012.

In this year’s World Cup, the German Nelly has predicted all of Germany’s group games in advance. Of those games, only Germany vs Portugal has been played, which Nelly predicted to be a draw.

In conclusion, it looks like the 80% hit rate of Shaheen is the best bet. Given Nelly’s previous track record, he may also be a good bet if some of his Germany predictions turn out to be true.

Unfortunately, there does not quite seem to be an animal that carries the same reliability as Paul back in 2010. To all gamblers out there using these animals, make your picks with caution.