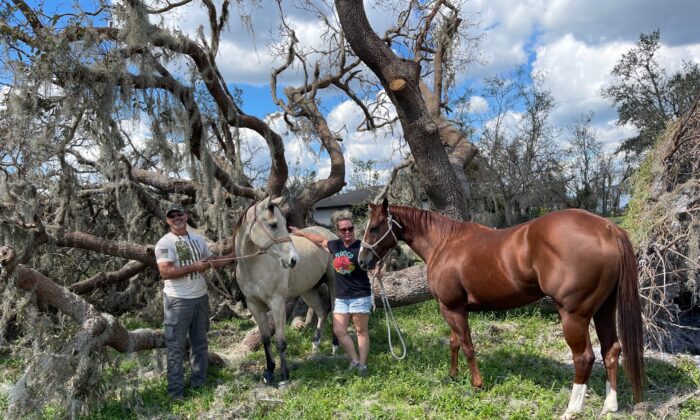 PUNTA GORDA, Fla.–The day Hurricane Ian roared ashore—Sept. 28—will be an anniversary no one in Southwest Florida wants to celebrate.

The Category 4 storm left communities on the Gulf Coast, and the people who live there, devastated.

Shaking her head, her voice cracked.

Before Ian, Motteler, a nurse practitioner, cared for patients in the health clinic she operates. Her husband, Carl, helped sculpt the community’s future with his land-clearing business. Both have woven themselves into the fabric of the little hamlet. Nowhere else is home.

After more than two decades in their community, the Mottelers have vowed not to let Ian chase them away. They’re “digging in,” she said.

They’ll repair the damage to their businesses and the home they share with two horses and six rambunctious Border Collies.

“And I will continue to compete in my [horseback] barrel races and go on with life,” Motteler declared, as if still trying to convince herself. “You can’t stop living because you’ve had some adversity like this. Fight back!”

Nowhere Else to Go

In the early hours of Ian’s 12-hour rampage through the community, the wind began to howl and shriek. Then it got worse.

As floodwaters poured into the Mottelers’ home from under the door, they retreated to an attached horse barn that was still dry inside. There, they huddled in a storage room for bridles and saddles, hoping the 10-foot-by-10-foot refuge would hold.

“Built sturdy out of rock and cinder blocks,” Motteler explained. With dogs in crates stacked atop each other, “we rode the storm out here in this room.”

Debris pummeled the outer walls, and Motteler’s stomach churned with worry about the four horses in concrete-block stalls, just outside the hiding place. Two were her own and two were horses she took in for a neighbor. They had nowhere else to go.

Motteler hails from Indiana, “tornado country,” and knows the unmistakable sound of deadly twisters “better than anyone,” she said. “I heard at least six of them come over.”

With every passing minute of the storm, Motteler grew increasingly angry. Fearing storm surge, she’d pleaded with owners of more-inland facilities to shelter the horses, while there was still time to plan their escape. Every one said ‘no,’ citing liability concerns.

“We were in a state of emergency!” Motteler growled in disgust.

After the rejections, there wasn’t time to make it to horse facilities in other parts of the state. Three hours north, the luxurious World Equestrian Center in Ocala quickly filled its 3,000 stalls with horses of terrified owners trying to get their animals out of the storm’s path.

But Motteler was out of time. It was too late to flee.

“It was in God’s hands at that point … all of our lives were.”

For 12 hours, wind-blown debris pounded the outer walls of the barn and tack room.

Motteler worried about the horses, powerful-looking animals that can die of fright. She wondered when the surge of floodwater would pour in under the doors of the barn. She glanced at her husband and the dogs, and fretted, Is this how it’s all going to end for us?

“I just prayed for grace,” she said, looking around her once-manicured property, now in shambles. “That’s all you can do when you stare death in the face.”

‘I Was Prepared for God to Take Me’

Nearby, neighbor Ken Smith chose to ride out the storm in his mobile home. If he had it to do over, he would evacuate as ordered, he said the day after.

But when faced with the decision as Ian approached, he felt he had to stay. He was needed at home.

Smith never turns away an animal in need. Some clients of his dog-sitting and grooming business couldn’t take their pets to places where they’d arranged to seek refuge.

So Smith promised to care for the animals. Four were entrusted to him for safekeeping. His own pups, Daisy and Missy, were counting on him, too.

Looking back, he admits he had no idea how violent Ian could become.

“I remember, during the height of the storm, I texted a friend,” Smith said, tears welling in his eyes at the memory. “I didn’t know what to do. I thought I was going to die.”

Trying to calm the panicked dogs, he tapped out a frantic message: “My house is breaking apart!”

“It was rocking off its foundation,” he recalled. “I was terrified. There was just nothing you could do but just ride it out and pray.”

The neighbor offered to come for him when the hurricane’s eye passed over, providing a brief, eerie calm before the battering began again. He wouldn’t hear of it.

“I didn’t want her putting her life in danger,” Smith said.

Hour after hour, Ian whipped his mobile home, flinging shards of neighboring homes into its sides.

“I didn’t care if I floated away on my mattress in the middle of the night, at that point,” he said. “I was mentally exhausted. I was prepared for God to take me if it was my time.”

But it wasn’t. The following day, all four guest dogs, tails wagging, were reunited with their families.

And good has come from Smith’s harrowing experience.

It’s shown him how kind people can be to one another, he said. He’s felt renewed watching neighbors helping neighbors with tasks large and small, as they all focus on how to begin to rebuild.

“My neighbor brought me food, so that I would have enough to eat,” Smith said. “Another neighbor helped with the large tree that fell in my front yard.”

It shouldn’t take a natural disaster to bring out the best in people, and kindness should be an everyday act, he said.

But being able to witness the sense of community on debris-strewn Riverside Drive has buoyed his sodden spirits. A smile flickers across his face.

“People are just amazing, when they want to be.”