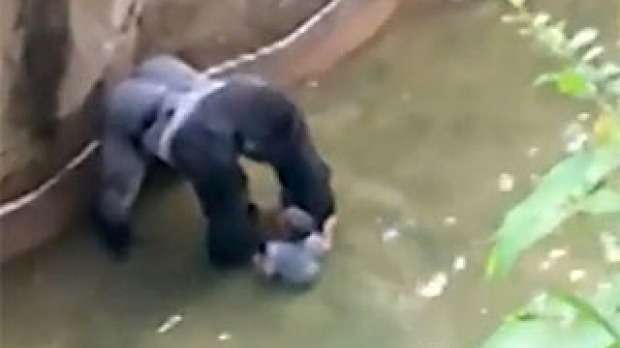 An animal behavior expert has said that the 17-year-old gorilla, Harambe, who was killed over the weekend after a 3-year-old boy fell into its enclosure at the Cincinnati Zoo may have been agitated by the crowd’s screams.

Professor Gisela Kaplan, a professor at the Centre for Neuroscience and Animal Behavior at the University of New England in New Zealand, said the gorilla was a “gentle giant” who initially sought to protect the child.

The gorilla, she said, likely dragged the boy to guard him in response to the crowd’s screams.

“Gorillas don’t attack,” she said, according to The Age. “They are a peaceful species. They will only attack if there’s a real threat to their own existence. There are records of them saving children before in very similar situations when a child had fallen into an enclosure.”

“The decision was not made lightly.”

Why was this rare gorilla killed after a 4-year-old fell into its den? https://t.co/l12HOfpzRb

According to the Australia Broadcasting Corp., Kaplan elaborated more, saying the gorilla wouldn’t have perceived the boy as a threat.

“He would have known by the sheer size and demeanor of the little boy that he was not a threat, because size difference does matter in the natural world,” she told the broadcaster. “It would have been very obvious to the gorilla at once that it [the boy] was not a threat, so there was no need to react aggressively to it.”

She added: “Some people have argued that ‘well, he dragged the boy through the water,’ but I have to say that they do that with their own young to get them out of danger quickly and the danger in this case, ironically, were the screaming adults.

“There was pandemonium there and total chaos and the gorilla very likely responded to the screaming and took the boy away, around the corner, away from the screaming [to save him].”

Kaplan agreed that the boy’s life was a greater priority to Harambe’s, but said there might be a peaceful solution rather than shooting it.

“[Harambe] was probably doing all the kind of benign things that a gorilla can do and he was being penalized for it and lost his life and traumatized his entire family,” she said. “Why couldn’t they have shot him in the shoulder?”

“This child was being dragged around,” director Thane Maynard said. ” His head was banging on the concrete. This was not a gentle thing. The child was at risk. We’re very fortunate that he was OK.”

Celebrities React to Killing of Gorilla in Cincinnati Zoo

Maynard also said that tranquilizers might not have worked for as long as 10 minutes. “The gorilla was clearly agitated,” he said. “Looking back, we would make the same decision.”

“What makes the incident so controversial and tragic is that it’s been known now, for at least 30 years, by various incidences in American and English zoos, that gorillas are very gentle and the males have one role: to keep the peace in the group,” she said. “So he is a conflict negotiator and peace maker.”

Cincinnati Zoo’s Dead Gorilla Could Be a Father One Day

She added: “What they do in the wild is, if there is a real threat perceived by the silverback male, they will charge forward as a warning and sometimes he will use branches to make a bit of a percussion sound as well. [He will] rattle the tree a bit and flay his arms around and that usually convinces [the opponent] to backtrack really quickly.”

The family of the boy issued a statement on the matter on Wednesday, providing an update. The boy, they said, is “still doing well.”

“We continue to praise God for His grace and mercy, and to be thankful to the Cincinnati Zoo for their actions taken to protect our child,” the family said in a statement, according to Cincinnati.com. “We are also very appreciative for the expressions of concern and support that have been sent to us. Some have offered money to the family, which we do not want and will not accept.”

“If anyone wishes to make a gift, we recommend a donation to the Cincinnati Zoo in Harambe’s name.”

Cincinnati police are looking into potential criminal charges against the parents. “It’s too early to say whether it was recklessness on the part of the parent,” Lt. Steve Saunders told Cincinnati.com. “We’re just doing our due diligence to make sure we know what happened.”