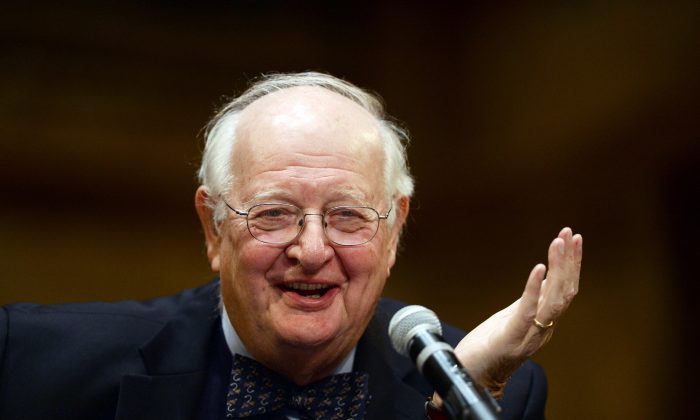 STOCKHOLM—Angus Deaton of Princeton University won the Nobel prize in economics Monday for improving understanding of poverty and how people in poor countries respond to changes in economic policy.

Deaton, 69, won the 8 million Swedish kronor (about $975,000) prize from the Royal Swedish Academy of Sciences for work that the award committee said has had “immense importance for human welfare, not least in poor countries.”

The secretary of the award committee, Torsten Persson, said Deaton’s research has “shown other researchers and international organizations like the World Bank how to go about understanding poverty at the very basic level.”

Persson praised Deaton’s work for illustrating how individual behavior affects a broader economy and demonstrating that “we cannot understand the whole without understanding what is happening in the miniature economy of our daily choices.”

Deaton, who was born in Edinburgh, Scotland, and holds U.S. and British dual citizenship, said he was delighted to have won the prize and was pleased that the committee had awarded research that concerns the world’s poor.

“Thinking about numbers hard is one of the things I think is really important,” Deaton told The Associated Press.

Speaking to reporters by phone from Princeton, Deaton said that he expects extreme poverty in the world to continue to decline but that he isn’t “blindly optimistic.”

There are still “tremendous health problems among adults and children in India, where there has been a lot of progress,” Deaton said. He said half the children in India are “still malnourished” and “for many people in the world, things are very bad indeed.”

Deaton has done “very careful, detailed work with household-level data sets (in poor countries) so that one could understand the effects of changes in policies on how people behave,” Rodrik said.

“His view is that we don’t have these ready-made solutions, and money is not going to be the answer to many things,” Rodrik said.

Committee member Jakob Svensson said Deaton introduced the “Almost Ideal Demand System,” now a standard tool governments use to study how a change in economic policy — say, an increase in sales taxes on food — will affect different social groups and how large the gains or losses will be.

The Indian government has changed how it measures and addresses poverty thanks to research from Deaton and others.

Ingvild Almas, associate professor at the Norwegian School of Economics, said the Indian government has changed how it measures and addresses poverty thanks to research from Deaton and others.

“Deaton found that there were a lot more poor people in rural areas of India than previously thought,” she said. “That has affected India’s subsidy system for the poor, which allows them to buy necessities. Households that were not defined as poor before can now be reached with these policies, and that is a direct result of Deaton’s research.”

The economics award isn’t among the original Nobel prizes, which were created by Swedish industrialist Alfred Nobel in 1895. But it was added in 1968 by Sweden’s central bank and is presented with the others and carries the same prize money.

The medicine prize went to three scientists from Japan, the U.S. and China who discovered drugs to fight malaria and other tropical diseases. Japanese and Canadian scientists won the physics prize for discovering that tiny particles called neutrinos have mass and scientists from Sweden, the U.S. and Turkey won the chemistry prize for their research into how cells repair damaged DNA.

Belarusian investigative journalist Svetlana Alexievich won the literature award. And the peace prize went to The National Dialogue Quartet in Tunisia for its contribution to building democracy in Tunisia following the 2011 Jasmine Revolution.

The awards will be handed out Dec. 10, the anniversary of Alfred Nobel’s death in 1896, at ceremonies in Stockholm and Oslo.

Deaton, who spends part of his summers fly fishing in Montana, told the AP that he had no big plans to celebrate.

“I’m just hoping it’s not a dream which I’m going to wake up from,” he said.