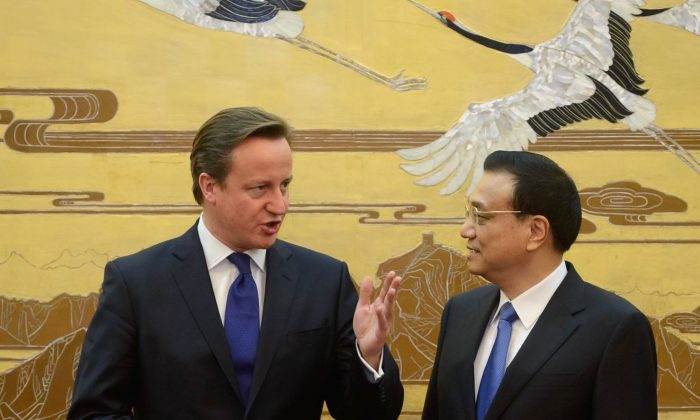 British Prime Minister David Cameron (L) and Chinese Premier Li Keqiang (R) attend a signing ceremony at the Great Hall of the People in Beijing on Dec. 2, 2013 in Beijing, China. Cameron, during that visit, concluded on a human rights dialogue with China that the latter has now unilaterally cancelled. (Ed Jones/Getty Images)
China

A recent report on rights in China by the U.K. government was said to have engaged in “unreasonable slander and criticism.”

The Human Rights and Democracy Report 2013, published by the Foreign & Commonwealth Office on April 10, identified China as a “country of concern.”

The report includes the same basic description of human rights conditions in China that is provided by international human rights groups and other Western governments, including the United States.

“China’s economic growth continues to contribute to improved economic and social rights for many Chinese citizens,” the report observes in its opening lines. “However, civil and political rights remain subject to significant restrictions.”

The section on China then goes over the most prominent cases of human rights abuse in the past year. It even includes guarded acknowledgement of some advances in human rights in China, such as promises, made in November (though since rescinded) that China would stop using organs from executed prisoners for transplant.

China’s foreign ministry did not specify which part of the report was “irresponsible and careless.”

Hua Chunying, the foreign ministry spokesperson, however, gave some insight into the Chinese regime’s thinking behind cancelling the dialogue with the U.K.

“When engaging in dialogue between people, and between countries,” Hua said, in a question and answer with reporters that was published online, “the principle of equality and mutual respect should be followed. The purpose is to, through dialogue, improve understanding, increase mutual trust, and promote cooperation.”

Descriptions of abuses of human rights of Chinese citizens by Communist Party security forces do not appear to be in accord with this spirit, according to the Chinese view. Hua said that reports like those by the UK “use the excuse of human rights to interfere in China’s internal politics and the sovereignty of its judicial system.”

A spokesperson for UK’s Foreign & Commonwealth Office said in a prepared statement, read over the telephone, that “We are disappointed that the Chinese government last week unilaterally postponed the dialogue which was due to take place on the 16th of April.”

The spokesperson continued: “It is not for us to say why it was postponed…. We consider the dialogue to be an important part of bilateral relations with China.”

The UK did not seem repentant about its report on human rights in China. The spokesperson indicated that there were no plans to change how conditions in China are reported. “We stand fully behind the report,” the spokesperson said.