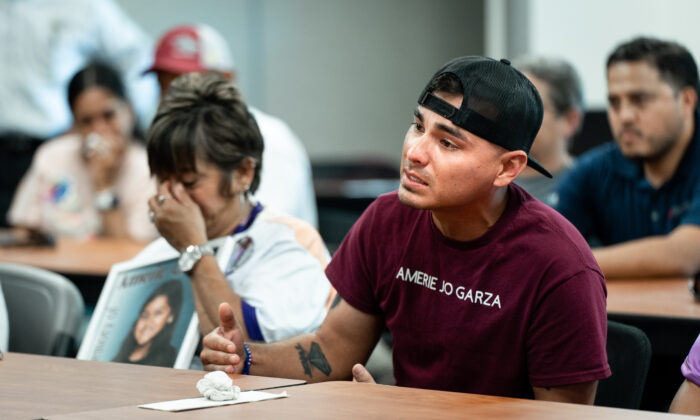 UVALDE, Texas—Family members and friends of the 21 victims in the May 24 mass shooting in Uvalde, Texas, have flocked to city council meetings—the only venue where they say they’re being heard—to express their frustration and seek answers.

They’re begging for help. Desperate for answers. And no one is providing them.

They want to know why it took law enforcement officers 77 minutes to enter the unlocked classroom at Robb Elementary School and kill the gunman. They want police body camera footage and the 911 calls to piece together the final moments of their loved one’s lives and to try to get a semblance of accountability. All they get is snippets on the news.

“What if it was your kid? Do something.”

Velma Lisa Duran—whose sister, teacher Irma Garcia, was killed in the massacre—traveled from San Antonio to attend the meeting.

Tina Quintalla-Taylor, whose daughter survived the shooting, said: “You have no idea, at night, how many screams I have to hear.

“We’re not getting any answers, zero justice—nothing. And we’re the ones that have to deal with everything.”

The mayor and council members are bearing the brunt of the anger because they’re the only ones allowing a back-and-forth conversation with the family members with no time limit.

At school board meetings, on the other hand, five people are allowed to speak for three minutes each and board members don’t respond to the speakers.

Family members pleaded with the mayor and four council members to attend the July 18 school board meeting with them. They said they will.

Uvalde Mayor Don McLaughlin says he’s just as in the dark as the family members are.

The last briefing he said he received from the Texas Department of Public Safety (DPS)—the lead investigators of the shooting—was the morning of May 25, the day after the massacre. Since then, he’s received letters from both the DPS and District Attorney Christina Mitchell Busbee’s office, warning him of legal consequences if he releases any information.

“If we did have something and we released it, then we would be subject to individual criminal charges. But we don’t have it—we don’t have anything to give you or we would, I promise you,” McLaughlin said.

He said he invited Busbee to the city council meeting “so she could explain to us, and to you, why we can’t get any information, so that you would hear it firsthand.”

Parents at the meeting turned their anger toward Busbee and said they intend to look into recalling her.

Busbee didn’t respond to The Epoch Times’ questions about when she plans to provide parents with more information and what her response is to accusations of a cover-up.

McLaughlin said he’s tried to obtain both the 911 call records and the body camera footage from the shooting—even just the footage from the local Uvalde Police Department—but he’s been stonewalled at every turn. He hasn’t even been able to view it.

He said, aside from DPS and the district attorney, the FBI and Texas state legislators have the footage.

McLaughlin disputed a claim made by DPS Director Steve McCraw about a 911 call made at 11:21 a.m. on May 24, before shooting suspect Salvador Ramos entered the school.

“I can tell you with 100 percent certainty, there was no 911 call to the city of Uvalde by the grandmother,” McLaughlin said, referring to Ramos’s grandmother, who Ramos shot in the face before driving to the school.

He said the first communication the city received regarding the grandmother was at 11:35 a.m.

“There’s 14 minutes that are unaccounted for, that we don’t know the answer to, and we would like to know,” McLaughlin said.

On May 28, McLaughlin asked the U.S. Department of Justice to open an independent investigation into the shooting response. He met with the investigation team on June 29.

Pete Arredondo, the police chief for the Uvalde Consolidated Independent School District, has been heavily criticized for his role in the response to the massacre that left 19 children and two teachers dead, as well as 17 people injured.

The school board declined to take action against Arredondo until a month later, on June 22, when the superintendent placed him on administrative leave.

Duran said the board failed by not immediately firing Arredondo.

“The minute that happened, someone should have said, ‘No, you failed to do your job,'” she said.

“Had a teacher slapped a kid, she would have been fired on the spot.”

Arredondo had also been elected to the city council for Uvalde’s District 3 just two weeks prior to the mass shooting and was sworn into the position during a closed-door ceremony on May 31.

The June 30 council meeting was the second consecutive public meeting that Arredondo failed to attend after the council previously denied him an extended leave of absence. If he had missed three in a row, his seat would be considered vacated; however, McLaughlin told The Epoch Times that he received Arredondo’s resignation letter on July 2.

“We had a lot of officers on the scene. If we put all them on leave, we wouldn’t have any to cover the town,” DiPiazza said.

“Well, what does it matter?” asked a parent.

Berlinda Arreola, grandmother of Amerie Jo Garza, said: “The same cops that couldn’t protect our kids, they’re going to go after us if we start protesting or we start speaking up.

“We’re looking for some answers that nobody seems to be getting. And it’s just making Uvalde PD and everybody else look even more guilty.

“We’re not blaming y’all. We’re voicing our anger towards y’all, because y’all are here and we’re looking for answers.”

“Col. McCraw has continued to lie, leak, mislead, and misstate information in order to distance his own troopers and rangers from the response,” McLaughlin said at the June 21 council meeting.

DPS didn’t respond to questions from The Epoch Times about how many of its officers were in the school hallway on May 24 and what the agency’s response is to accusations of a coverup.

McLaughlin said he had testified the day before the council meeting in front of a state legislative committee and asked for the subsequent report to be released to the parents before it was made public.

Parents asked McLaughlin to help set up a meeting with Texas Gov. Greg Abbott, so he can answer their questions and hear their concerns.

Abbott’s press secretary, Renae Eze, told The Epoch Times that “the Governor will continue visiting with the Uvalde community and local leaders.”

“The investigations being conducted by the Texas Rangers and the FBI are ongoing, and we look forward to the full results being shared with the victims’ families and the public, who deserve the full truth of what happened that tragic day,” Eze wrote in an email.

Families are terrified of sending their children to school next month when the new year begins.

Robb Elementary is slated to be demolished, with a new campus to be built on a different site. The children who had attended Robb are being spread over other campuses in the city.

“Are you counting on the school police to help us feel safe?” Garza asked.

“The only thing I can promise you is not the answer you want—when school opens up, there will be an overwhelming amount of law enforcement,” McLaughlin said, reiterating that he has no jurisdiction over school district policing.