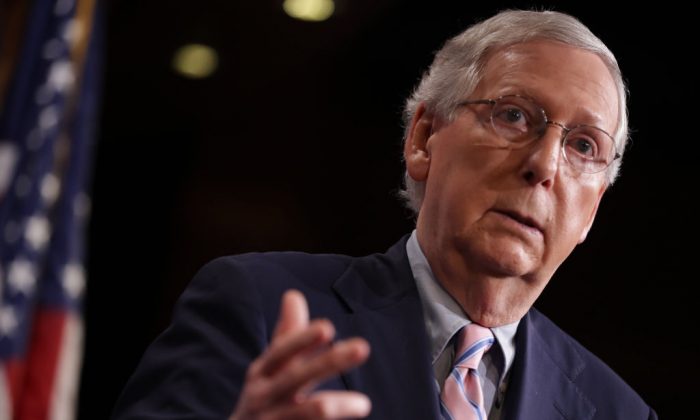 Angry Protester Confronts Mitch McConnell at Restaurant, Gets Told to ‘Leave Him Alone’

Aggressive protesters confronted Senate Majority Leader Mitch McConnell at a restaurant on Friday, Oct. 19, but faced pushback from other customers who told them to leave the Kentucky Republican alone.

An unidentified man can be seen in a video obtained by TMZ verbally attacking McConnell at a restaurant in Louisville, Kentucky.

The visibly angry diner leaned close and pointed at McConnell and his wife, Transportation Secretary Elaine Chao, and yelled at them.

The person recording the footage can be heard saying “I’m going to sell this to TMZ!” as customers waved their hands dismissively at the protester and called for him to tone it down.

TMZ reported that McConnell was initially confronted by four men as he sat in a booth with his wife.

“Oh yeah, why don’t you get out of here? Why don’t you leave our entire country,” a protester tells the couple.

Chao appears to argue with the protester, while McConnell sips on a drink.

Some diners then begin to defend McConnell and tell the protester to “leave him alone.”

The mustachioed protester then turns around to face the other diners. “They’re going to come for Social Security,” he says to them and waves his arms.

It then appears the protester is approached by restaurant staff.

The woman who recorded the incident reportedly told TMZ that the protester slammed his fists on McConnell’s table and threw food out of the restaurant after accusing McConnell of killing people.

The outlet reported that after the situation settled down, McConnell thanked some of those who stuck up for him.

“The Leader and Sec. Chao enjoyed their meal in Louisville last night and they appreciate those who spoke up against incivility,” McConnell spokesman David Popp said in a statement, according to Fox News. “They hope other patrons weren’t too inconvenienced by left-wing tantrums. As the Leader often says, the Senate will not be intimidated by the antics of far-left protestors.”

Some protesters have embraced a more confrontational and aggressive approach recently, for example chasing Sen. Ted Cruz (R-Texas) and his wife out of a restaurant in Washington.

A number of prominent Democratic politicians have appeared to encourage such behavior.

Former presidential candidate Hillary Clinton said it’s not possible to be civil with Republicans any longer.

“You cannot be civil with a political party that wants to destroy what you stand for, what you care about,” Clinton told CNN’s Christiane Amanpour on Oct. 9. “That’s why I believe, if we are fortunate enough to win back the House and/or the Senate, that’s when civility can start again. But until then, the only thing Republicans seem to recognize and respect is strength.”

This is not the first time protesters confronted McConnell in a Kentucky restaurant.

Protesters caught up with McConnell in a Louisville restaurant in July and reportedly yelled “abolish ICE” and “no justice, no peace.”

I see what they did here. They waited until Elaine wasn’t around. -MM #dontleavehomewithouther https://t.co/tfjLu0IRok

“I see what they did here. They waited until Elaine wasn’t around,” McConnell later tweeted.

“The radical Democrats have turned into an angry mob,” President Donald Trump said at a recent rally.

“There is going to be an assassination if this doesn’t ratchet down,” Sen. Rand Paul (R-Ky.), according to Fox, before calling for a “toning down of the rhetoric.”