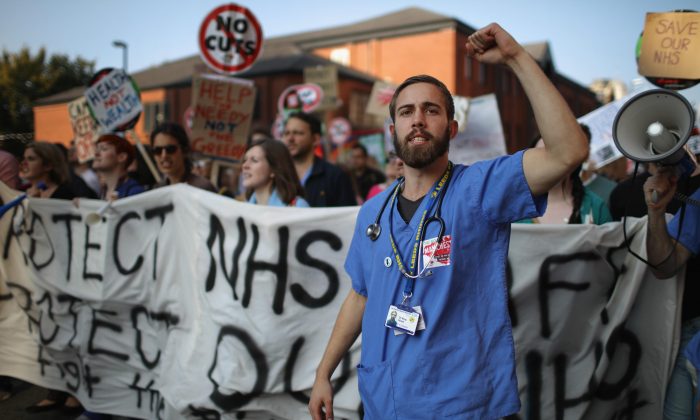 Angry Doctors Are Just the Latest Victims of Globalization

The current threat of a doctors’ strike is just the latest example of the unhappiness of U.K. National Health Service (NHS) staff. In 2014 we saw strikes from nurses, occupational therapists, porters, paramedics, and health care assistants—the first in the health service since the 1980s. Staff is being asked to make huge efficiency savings after years of small or nonexistent pay increases. Morale has plummeted as health care workers come under fire for the quality of NHS care.

The latest conflict is over the planned introduction of a full seven-day service. Junior doctors are being asked to accept a cut in overtime pay in return for an increase in basic pay so that it becomes cheaper for hospitals to employ more staff on evenings and weekends. In response, the doctors have threatened to strike, while the number of physicians applying for documentation to work abroad has soared.

Doctors have the great advantage of being able to take their highly in-demand skills anywhere in the world, sometimes increasing their salaries significantly in the process.

Doctors have the great advantage of being able to take their highly in-demand skills anywhere in the world, sometimes increasing their salaries significantly in the process. But part of what’s driving them to leave their homes and families in this way are the pressures created by a globalized labor market. In some ways, doctors have become the latest victims of globalization, even if they remain in a much more privileged position than lower-skilled workers.

In the three days after the government revealed its new contracts, the number of doctors applying for a Certificate of Current Professional Status (CCPS) for overseas work rose from the usual 20–25 a day to almost 550 a day. But the numbers seeking to work abroad has been increasing for some years now. General Medical Council figures indicate that the number of U.K.-qualified doctors issued with a CCPS increased by 22 percent between 2008 and 2013.

Our own (as yet unpublished) freedom of information request identified that the vast majority—more than 80 percent—of those issued with a certificate are under the age of 40. During the 2014–2015 winter accident and emergency crisis, the College of Emergency Medicine highlighted a sustained “trained brain drain” of staff moving overseas. Its survey of current trainees indicated this would likely continue into the future.

While we do not know how many of those issued with a certificate actually go abroad to practice, the main destination countries, such as Australia and New Zealand, rely heavily on migrant doctors including those from the U.K. In the case of New Zealand, the U.K. is the dominant source of overseas doctors, contributing half of its international medical workforce.

Healthcare workforce planning strategies in New Zealand, as well as countries such as Australia, New Zealand, Canada, and the United States explicitly rely on the international recruitment of doctors (and other healthcare professionals) as a solution to domestic shortages. The evidence is that those countries intend to continue this policy for years to come to meet demands for increasing healthcare provision in their ageing societies. These destinations are vigorously competing for healthcare workers, promoting their salaries, professional opportunities, and lifestyle to potential healthcare employees.

In such a globalized labor market, U.K.-qualified doctors have a clear escape route from the austerity-hit NHS. Unlike many other groups of workers, this means they have some bargaining power. They can realistically threaten to take their skills elsewhere. So why does the government seem so determined to antagonize this key group of powerful professionals?

Not All Austerity Is Equal

Part of the answer is that to achieve its commitment to expanding access to NHS services while meeting spending targets, the government will need to be more hard-nosed than in the past when dealing with the medical profession. In this way, doctors are simply victims of the more generalized effort to erode pay and conditions of all NHS staff, and those in the public sector more broadly.

But the globalized labor market that allows U.K.-qualified doctors to move abroad also means the government can replace them with doctors from countries where the impact of economic crisis and austerity is even worse. So ministers can cut pay and renegotiate working conditions knowing that the NHS will still offer its own advantages of salary, professional opportunities, and lifestyle. They are happy to drive away U.K.-qualified doctors because there are other professionals from poorer countries willing to take their place.

Between 2010 and 2013, the number of overseas-qualified doctors working in the U.K. increased significantly faster than that of U.K.-qualified doctors. The biggest increase was among doctors from other EU countries. Italy is now the top source country in the world for new doctors registering in the U.K., followed closely by Greece and Spain. Meanwhile, recruitment from traditional source countries such as Pakistan and India is falling.

It is short-termist for the government to rely on crisis-stricken European countries to replace U.K.-qualified doctors, and not just because of the money spent on training them that is effectively wasted if they emigrate. When those countries recover their economic positions, the global war for talent and skills will strengthen, making the U.K. less attractive. While NHS employers have recently launched initiatives to encourage U.K.-qualified doctors currently abroad to return, it is difficult to see how these can succeed if the new contracts are imposed.