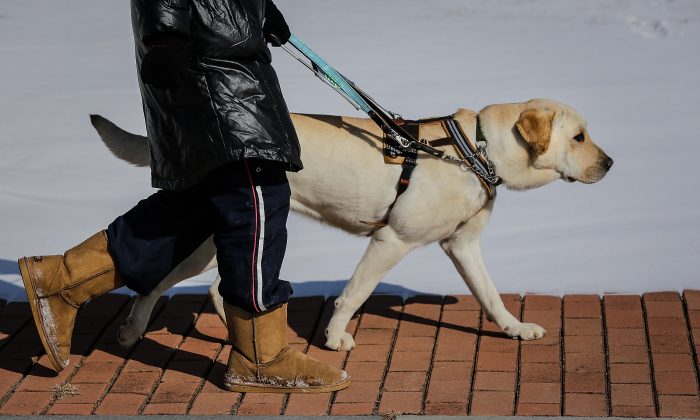 A seeing eye dog and its owner (not directly related to the story). (Wang He/Getty Images)
UK

An impatient subway commuter was caught on camera pressuring a blind man to move his seeing eye dog so he could get past him on the escalator.

Amit Patel, 37, a former doctor who started losing his sight 3 years ago, was at the London Bridge metro station with his guide dog Kika on Tuesday, Feb. 6, MailOnline reported. An irate passenger standing behind the blind man demanded that he move aside.

Patel was standing on the right side of the escalator, and his dog–equipped with a mounted camera–was on the left.

If you see a #GuideDog on a escalator please wait patiently behind. Under no circumstance should you try to push through! I’m trained to hold my ground to keep dad & myself safe. Great job by @TfL staff who was with us ? @guidedogs @GuidedogsLondon @transportforall #LondonBridge pic.twitter.com/zny8J6zisI

In the video, the upset passenger can be heard saying, “I want to get past.”

Patel responded “I can’t do that, she’s a guide dog.”

The commuter then says, “I know that!”

A metro worker helping the blind man jumped in and said, “How do you expect him to move, he needs to hold onto the handrail.”

But the passenger would not relent, saying, “Just let go of the handrail so I can walk past.”

The footage, captured on the camera worn by the guide dog and posted on the @Kika_GuideDog Twitter account alongside earlier experiences from commuting by public transit.

Patel told MailOnline he and Kika have experienced a range of unpleasantries, including the dog being shoved and struck with umbrellas. He began to document his journeys as a way of mitigating the danger of public transit travel facing the visually impaired.

I enjoy music like the next dog but theres a time & place & this isn’t it!@TfL this is happening on a daily basis on the tube, loud instruments along with amplifiers FREAK us #GuideDogs out! @TfLAccess TfLAccess @guidedogs @gdcampaigns @BTP pic.twitter.com/kuxhfjRzRS

The former doctor began losing his sight three years ago after being diagnosed with keratoconus, a condition that changes the shape of the cornea.

Patel underwent eight cornea transplants, all of which ended up getting rejected by his body.

Now he relies on the help of a seeing eye dog, and a GoPro camera strapped to her back, to keep an eye out and document what happens around him.

The man’s wife Seema later goes through the footage and tweets about noteworthy incidents.

“Kika always sits to my left hand side so we often block the escalator and people will hit her with bags and umbrellas to get her to move out of the way,” Patel said, according to MailOnline.

“The worst part is the tutting and negative comments behind me. People are so rude and arrogant and assume they can do whatever they want. One lady even said I should apologize to the people behind her for holding them up. I asked her if I should apologize for being blind and she said, ‘Yes.'”

Patel travels by train nearly every day and said that often passengers will not give up their seat for the visually impaired.

“Sometimes I get a train with my 4-month old son and I say quite loudly ‘Kika, find me a seat’ but no one budges.”

Patel said his wife described the scene captured in one of his recordings in which a woman refused to give up her seat and would not move the shopping bags she had placed on the seat beside her.

“Losing my sight is very lonely, if I’m traveling by public transport I’m sometimes like a scared little boy sat in the corner,” he said.

Since losing his sight, Patel has been working for the Royal Institute for the Blind volunteering with guide dogs.