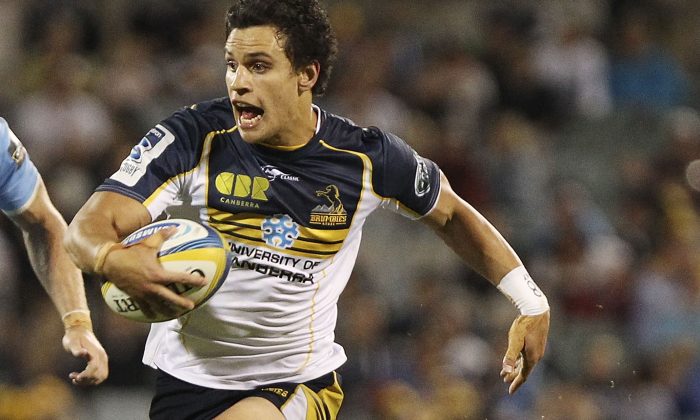 Each year the Waratahs start the Super Rugby season like world beaters – then as the going gets tough, they stumble, perform ineptly, then end up being booed from the field by their supporters.

But not this year … it was hoped.

The Waratahs had won their first two games, thrashing fellow Australians the Force 43-21 and the powerful Reds 32-5.

Former league star Israel Falou was scoring tries at will. Perennial bad boy Kurtley Beale was looking sharper than ever, having returned home following a troubled stint with the Melbourne Rebels, which included time in rehab following a series of drunken rampages.

Relatively new coach Michael Cheika was seen as a saviour. The former combative loose forward was a hard man, who would knock the indulgent Waratahs into shape. Firstly, with his mental attitude, and, secondly, with his hard-work ethic.

But, as always, the Waratahs found a way of turning their strengths into weaknesses. As a result, they were beaten 28-23 on Saturday (Mar 15) by fellow Australians the Brumbies, in Canberra.

The head donkey was Waratahs captain Dave Dennis, who said in the lead-up to the game: “… If there is an opportunity to whack one of the Brumbies boys, we will try and do it”.

The comment might have been acceptable, if not for the context. Dennis was responding to questions about the animosity several Waratahs hold towards Brumbies captain Ben Mowen and hooker Stephen Moore.

The grudge developed during Wallabies tour of the UK last year. Fifteen players were punished for breaking the team curfew in Dublin.

Eight of those players are from the Waratahs, including Dennis. The Waratahs players claim Mowen and Moore had told Wallaby management that they were out drinking.

That claim has been refuted by Mowen and Moore, and more importantly by Wallaby coach Ewen McKenzie.

“No player dobbed in any other player in Dublin, or anywhere else,” McKenzie said. “I can’t make it clearer than that.”

Whatever happened in Dublin, Mowen and Moore are blameless. The problem is that players broke an agreed curfew ahead of a Test against a strong Ireland.

A bigger problem is that the guilty still act like the injured party – as they did at the time.

Ahead of the Waratah-Brumbies clash, Cheika tried to keep his players on track by saying: “If you have to motivate yourself by one-off, cheap antics, you’re crocked.”

Well, his captain used “cheap antics” and his Waratahs were “crocked”.

After the victory, a quietly angry Mowen said the win was “rewarding”, adding: “… it’s only rewarding because we know they’re a quality side”.

Mowen and Moore are respected at the Brumbies. Mowen captained the Wallabies last year and Moore is one of the leading international hookers.

From early in the “grudge” match, it was obvious that the Brumbies players had rallied behind Mowen and Moore. Consequently, the game was virtually over by half-time.

Like Mowen and Moore, Dennis should let his actions do the talking. His tough talk cost his side the match, earned scorn from fans and may have undermined team spirit in the national side.

There is more to it, though. New Brumbies coach Stephen Larkham is due credit for the tactics that nullified the Waratah back-line.

Larkham was a brilliant fly-half for the Brumbies and for the Wallabies, when those sides dominated Super Rugby and international rugby. Both sides thrilled crowds playing the much-loved, but long-absent Australian running game.

Brumbies fly-half Matt Toomua, a young Wallaby, is benefiting from Larkham’s attacking genius. But against the Waratahs, Toomua defended brilliantly. He continually flashed out of the back-line to end Waratah attacking moves with precision tackles. Toomua’s expanded game will be a godsend to Wallabies coach McKenzie.

Meanwhile, Reds fly-half star Quade Cooper continues his improvement – both off the field and on. Last year, the controversial Cooper was made vice-captain of the national side by McKenzie. But, Cooper, like Beale, was often in trouble off the field – often with Beale. However, Cooper wasn’t one of the late-night drinkers in Dublin.

Whether Beale can make the transition from self-appointed “superstar” to hardened professional remains to be seen. It is questionable whether Ckeika’s volatile style is a good match for Beale’s incendiary personality.

Meanwhile, the Waratahs questionable behaviour wasn’t limited to only the players. The Waratahs will be charged AU$700 (HK$5000) to replace a glass door that was broken by Cheika during the game.

A television report said Cheika confronted referee Jaco Pepyer after the match. Cheika later said he was frustrated by scrum rulings. “I admit it, for sure.”