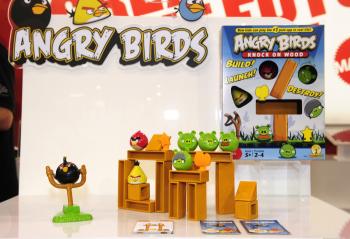 Angry Birds board game by Mattel, is on display at the 2011 International Consumer Electronics Show January 8, 2011 in Las Vegas. Angry Birds, the hugely successful mobile phone game, could likely be an animated series in the future. (Robyn Beck/Getty Images)
Entertainment

"We are planning a cartoon that would be interesting to the whole family, for both adults and children," spokesperson Ville Heijari told the news agency.

In the two years since the game was released on the iPhone and later, on Android phones, Angry Birds has catapulted into one of the most popular games around with more than 50 million downloads, according to the New York Post.

The company is looking to either produce the series for the Internet or TV, according to the newspaper.

The puzzle game is simplistic: users have to hurl birds at pigs to take back the birds' stolen eggs.

At the moment, other than games, Rovio offers Angry Birds iPhone cases and plush toys.