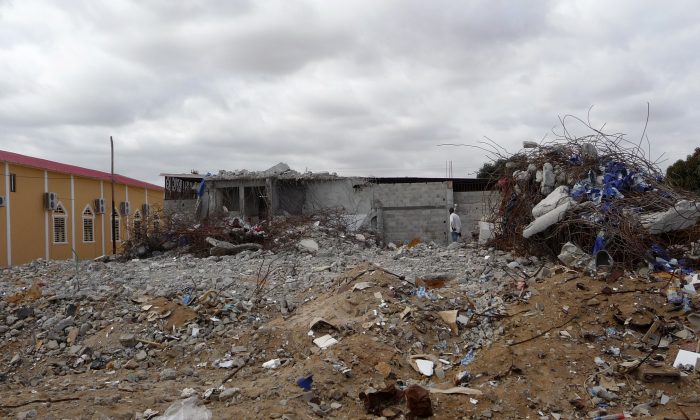 A picture taken on November 1, 2013 shows an Angolan muslim man walking near the ruins of a mosque in Viana, a suburb of Luanda, the Angolan capital, that community members claim was destroyed by bulldozers after police surrounded the mosque, arguing it did not have the proper documentation. Angola's government on November 26, 2013 denied it had banned Islam and closed mosques in the country, after speculation that sparked outrage among Muslims worldwide. "There is no war in Angola against Islam or any other religion," said Manuel Fernando, director of the National Institute for Religious Affairs, part of the ministry of culture. (Eastelle Maussion/AFP/Getty Images)
Africa

Did Angola ban Islam? It doesn’t appear so, although the country it taking measures against the Muslims.

Angola reportedly banned Islam about a week ago, with most English-language reports referencing French media.

The Lanouvelle Tribune was one of the French media outlets to report the supposed development.

“The process of legalization of Islam has not been approved by the Ministry of Justice and Human Rights; their mosques would be closed until further notice,” the outlet quoted Rosa Cruz, the country’s minister of culture, as saying.

Angola has also closed 60 mosques across the majority-Christian country, the Tribune reported. Another French outlet, Agence Ecofin, published the same article as the Tribune, even though the two were cited separately by many reports.

Palestinians hold copies of the Koran, Islam’s holy book, as they shout slogans against Angola’s government in Gaza City, on November 27, 2013, following reports that Angola, a traditionally devout Catholic nation, would crack down on Muslims. (Mohammed Abed/AFP/Getty Images)

Details about the situation are sketchy. One of the articles cited by IBTimes.com, for instance, references an article that is traced back to a fervent anti-Islam site, which has removed the original link to a story regarding the purported ban on Islam.

Following up on the shaky report, an unnamed Angolan official told IBTimes that there is no ban on Islam.

“The Republic of Angola … it’s a country that does not interfere in religion,” the official at the Angolan Embassy in Washington, D.C. said. “We have a lot of religions there. It is freedom of religion. We have Catholic, Protestants, Baptists, Muslims and evangelical people.”

Another official also denied the reports.

Regarding the comments by Rosa Cruz, the official said “I cannot confirm if the Minister of Culture said that. I cannot find that in our press.”

Another 25 percent combines Christian and traditional beliefs, while another 15 percent is one of a range of denominations outside of Catholicism, according to the National Institute for Religious Affairs.

The “small Muslim community” is unofficially estimated at 80,000 to 90,000 people, “most of whom are migrants from West Africa or of Lebanese origin.

“Some Muslim sources put these figures closer to 500,000, but it is not possible to confirm the estimate.”

Further, “Muslim group leaders reported Muslims could not practice Islam freely because the government did not recognize Islam and selectively intervened to close mosques, schools, and community centers. Although government officials asserted the government protected religious groups without legal status and did not have a policy to close mosques or other Islamic facilities, there were several reports of local authorities closing mosques or preventing their construction.”