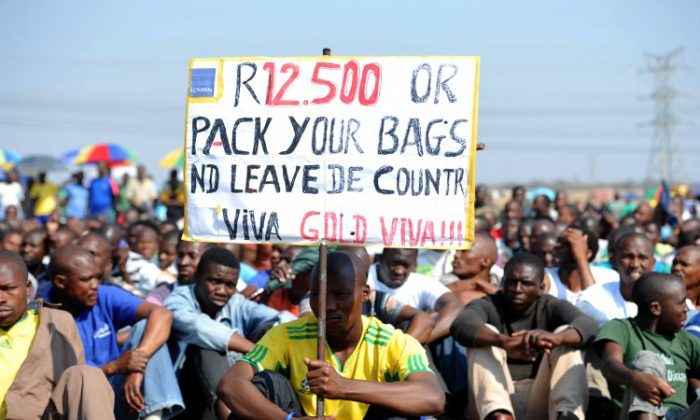 Striking Lonmin platinum mine workers sit on Sept. 14, 2012 in Marikana, South Africa, listening to their union representatives reporting back from a meeting with the management. (Alexander Joe/AFP/Getty Images)
Africa

AngloGold Miners Back to Work

After weeks of stop-and-go production punctuated by labor strikes, the third largest gold producer in the world, South African company AngloGold Ashanti, announced that its workers would return to the mines for the night shift Sunday, Nov. 4.

Hundred of miners, representing only 2 to 5 percent of the entire workforce, held underground sit-ins at Anglo Gold Ashanti’s mines in Mponeng and TauTona west of Johannesburg last week. They demanded the early payment of a promised bonus of 1,500 rand ($173), according to the BBC.

A company spokesperson told the broadcaster that this bonus would be paid “at a later stage, based on safety and attendance outcomes.”

In total, nearly 80,000 mine workers have gone on strike during the last few months in South Africa, according to Reuters. More than 30,000 miners have been dismissed for illegally striking, according to mining.com, a global mining news website. More than 50 people have died, most shot by police, reported Reuters.

The last two deaths occurred Thursday as security guards killed two workers trying to break into a locked mine explosives armory at Canadian-owned Forbes & Manhattan Coal Corp., reported mining.com.  As a result, the company decided to temporarily cease its operations.

According to reports on several websites that track the value of gold, as of the end of September, miner strikes had suspended 39 percent of South Africa’s gold production—a hard hit for an economy that relies heavily on the resource.

Unrest stirred in August in the platinum industry of South Africa, but quickly spread throughout the mining industry as a whole.

Workers for the platinum producer Lonmin set the bar. They accepted a 22 percent raise in salaries after six weeks of sit-in protests and violent clashes with police that resulted in the deaths of 34 workers.

Despite the reconciliation at the company’s Marikana mine, the stage of the protest, workers are still under pressure, as Lonmin announced possible job cuts next year. The company will freeze production, with as few job cuts as possible it says.

AngloGold Ashanti strikes began Sept. 20 at the Kopanang Mine in the Vaal River region, and later encompassed all six South African mines. The company employs a total of approximately 35,000 people. It estimates losses amounting to 32,000 ounces of gold production per week. The value of gold as of Nov. 4 was $1,680.12 per ounce.

In a statement, AngloGold Ashanti explained that as part of the gold industry’s central collective bargaining process under the auspices of the Chamber of Mines, it is obliged to follow standard rules for wage increase. The latest increase, in July 2012, was between 8 and 10 percent. A similar increase was granted last year.

The crisis also encompassed Anglo American Platinum Limited, the world’s largest platinum production company, headquartered in the United Kingdom. The company reports it is losing 3,694 ounces of platinum production per day, at a current rate of $1,543 per ounce.

The 12,000 miners dismissed while striking rejected management’s offer of a one-off payment of 2,000 rand ($228), and a 2,500-rand ($285) loan, to be paid back next January along with the reinstatement of their jobs, according to a Nov. 2 report by The Mail and Guardian Online.

“Management must talk about our original demands and say what they can afford,” striking committee member Evans Ramokga told The Mail and Guardian. “Many people have been shot by police for nothing so we don’t want to go back to work empty handed.”