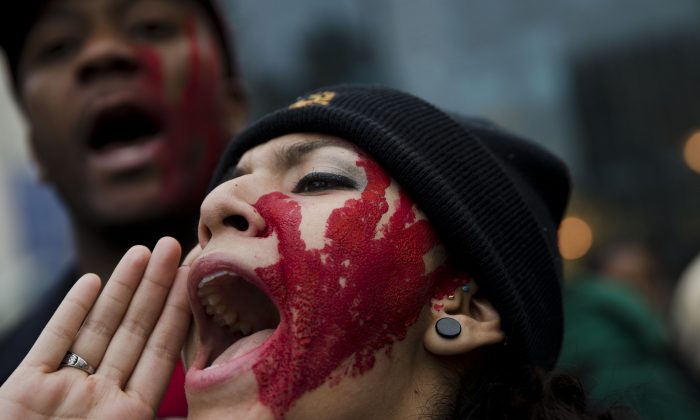 Protesters demonstrate on the day after the announcement that a grand jury decided not to indict Ferguson police officer Darren Wilson in the fatal shooting of Michael Brown, an unarmed 18-year-old, Tuesday, Nov. 25, 2014, in Philadelphia. (AP Photo/Matt Rourke)
Ferguson

Anger at Ferguson Case Based on Emotion, Evidence

Anger and despair swept through many parts of America after a Missouri grand jury decided not to indict Darren Wilson, a white police officer, for killing Michael Brown, a black 18-year-old.

What was behind the wave of emotion? Why do so many refuse to accept the grand jurors’ choice not to charge the cop with a crime in the death of Brown, who was unarmed? Why is there such disregard for the new evidence released with the decision?

Interviews around the U.S. show that these roiling emotions spring as much from America’s troubled racial history — which in many eyes has drained the justice system of legitimacy — as from a rational examination of all the evidence.

For many people, this history is the inseparable context for the 90 seconds of Brown and Wilson’s fatal encounter — and a rationale for the fury that has followed.

“It feels like the lynchings that happened in the last century. Racial profiling is the 21st-century lynching of black males. We need to call it what it is,” said Kevin Powell, head of the BK Nation advocacy organization, who has worked in Ferguson since Brown was killed in August.

“I’m depressed and numb, even though I expected the verdicts,” Powell said. “I don’t condone violence in any form, but I certainly understand all the anger out there. I’m very angry myself.”

Since the St. Louis County grand jury decision was released Monday, the anger has manifested itself in various ways across America: raucous protests in several cities; sharp conversations at work and between friends; raging on talk radio; impassioned comments on social media. And, of course, the anger erupted into the burning, looting and gunshots that wracked Ferguson for hours on Monday night.

Many took issue with the way Prosecutor Bob McCulloch chose to present and frame the evidence, or with the shifting explanation of why Wilson first stopped Brown. Others were upset that only three of the 12 jury members were black in a scenario that did not require unanimity or permit the possibility of a hung jury.

Then there were the emotional reactions, and a preexisting lack of confidence, for many, in the fairness and integrity of the U.S. legal system.

“More than anything, as a citizen of the United States you want to feel you can rely on the justice system to get it right,” she said. “I keep observing instances where the justice system gets it wrong when it comes to the black community. They find every kind of loophole and technicality to find that the murderer will go free.”

Finley firmly believes that Wilson should have waited for backup instead of chasing Brown after they struggled inside the police cruiser. She does not believe the testimony, from the officer and several eyewitnesses, that Brown was advancing toward the officer when he was shot.

“I don’t believe that he charged someone who had a gun pointed at him,” she said. “No scenario in my mind makes me think that. It just doesn’t make sense.”

Is Finley reacting rationally or emotionally?

“I think it’s both, and I think it’s OK to be both,” Finley responded. “It’s OK to say this is another example of black people in society are not afforded justice. I am able to separate the fact that Mike Brown made a bad decision in that situation. It still shouldn’t have cost him his life.”

That idea was echoed by Malaika Adero, a book editor in New York City. She said that Brown bore some responsibility for what happened, and that police have the right to defend themselves, “but still, there is nothing to me about this case that justifies that young man dying.”

“It’s part of a disturbing pattern that’s been going on for a long time,” Adero said. “It’s heartbreaking because of what it represents in the direction the country is going in.”

Adero acknowledged that she had not read all the grand jury evidence that had been released the night before, including previously unheard witness accounts said to support the officer’s story.

“I have a suspicion that (Wilson) is a criminal. More important to me is that the police force is the criminal. Police leadership is the criminal,” she said. “I don’t know about Wilson. But I know that systematically there are crimes being perpetuated by the state.”

“My outrage is not about Wilson,” Adero said. “It is about the accountability of our law enforcement system.”

Jo Cabey, a fourth grade teacher from Arkansas drove to St. Louis early Tuesday with two teaching colleagues. She said that Brown’s death long ago came to represent much more than a single death of a young black male.

“I’m frustrated and disappointed in this justice system that says there’s liberty and justice for all. But black males keep getting killed at the hands of people who are supposed to protect us,” Cabey said.

So the anger springs from many elements, from how the grand jury weighed points of law and pieces of evidence to how an officer’s gunshots ended a young life — and yet there’s more.

The case is bigger than simple guilt or innocence, said Charles Gallagher, chair of the sociology department at La Salle University in Philadelphia.

“That Officer Wilson was legally justified in shooting Michael Brown is both beside the point and irrelevant when it comes to understanding the triggers of civil unrest,” Gallagher said in an email.

“Justified or not, what the shooting brought to light once again was a white power structure (the police force, the school board, city council, mayor) treating blacks as second-class citizens.”

He said that, as a result of things like racial profiling, inflated fines for minor violations that made up a large percentage of Ferguson’s budget, white flight and declining education budgets, “Michael Brown became a symbol of simmering mistrust and racism.”

Which encouraged people to respond as much to the symbolism of the grand jury decision as the facts of it.

“We’re traumatized and hurt,” said Powell, the activist. “It’s almost like being part of a family where you are forever outside of the house. You think you got in the house because President Obama is in the White House, you have Oprah and other successful black people, and then this happens. You wonder: Are we ever going to be treated as equals in this country?”

“We’re not asking for much,” he said. “Just to be treated as citizens. That’s it.”