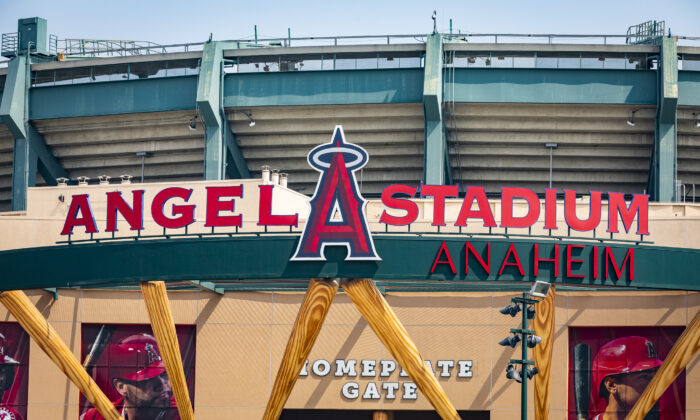 ANAHEIM, Calif.—As controversy brews over the $320 million sale of Angel Stadium, the Anaheim City Council was warned May 20 that the city had 25 days to finalize the deal.

The city council is expected to discuss the stadium deal at its next meeting May 24 while its councilors are calling for Mayor Harry Sidhu to resign after corruption allegations surfaced last week.

“SRB has met all its obligations and has every expectation that this transaction should move forward, and looks forward to the Council’s final action no later than June 14, 2022,” attorney Allan Abshez said in the letter.

Moreno can walk away from the sale, but the letter did not say what the team would do if the city did not approve it by the deadline. The team can still play at the stadium until 2038 under its current lease agreement.

The sale hit a snag when the state Department of Housing and Community Development filed a notice of violation last year, claiming the land needed to be first offered to affordable housing developers.

The city and the state Attorney General’s Office reached a settlement over the violation that required Anaheim to deposit a fine of about $96 million in a local housing trust fund for the construction of affordable housing and another $27 million to construct up to 466 rental units on-site for very low- or low-income housing. The settlement was approved by the city council.

But corruption allegations against Sidhu surfaced May 16 in an affidavit disclosed by FBI agent Brian Adkins who claimed a multi-year investigation found the mayor had shared confidential information about the sale negotiations with the Angels and expected to receive $1 million for his 2022 reelection from a “prominent Angels representative.” Sidhu has not been charged or indicted.

The state housing department then asked the Orange County Superior Court to pause the finalization of the deal for 60 days, “which would allow the facts to develop and allow parties time to determine how best to proceed under these unforeseen circumstances,” according to court documents. The request was granted May 17.

All six of the Anaheim City Councilors have since called for Sidhu’s resignation.

The stadium deal would require SRB Management to assume total financial responsibility for the renovation or replacement of the stadium and requires the team to stay in Anaheim through 2050.

The agreement would also require the company to develop the surrounding property into 466 units of low- and very-low-income housing and a 7-acre park.

The project is expected to deliver $38 million in new revenue each year for Anaheim from hotel, property, and sales taxes; and create over 30,000 construction jobs and more than 45,000 permanent jobs, according to the letter.