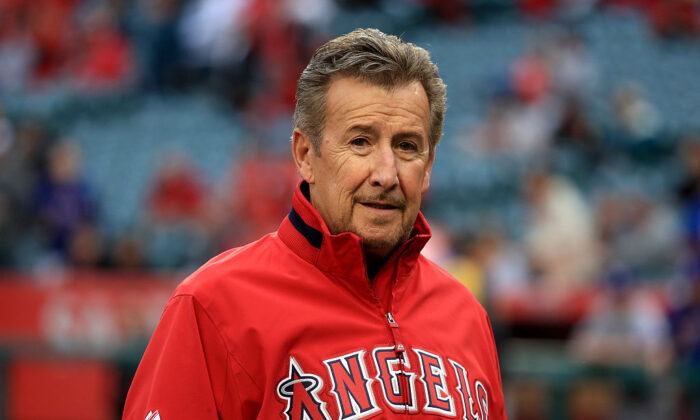 Owner Arte Moreno of the Los Angeles Angels walks off the field prior to a baseball game between the team and Texas Rangers at Angel Stadium in Anaheim, on April 9, 2016. (Sean M. Haffey/Getty Images)
By Jill McLaughlin

Los Angeles Angels baseball team owner Arte Moreno has abandoned efforts to sell the franchise, the team announced Jan. 23. He and his family will continue ownership through the 2023 season and beyond.

Moreno officially began exploring the sale in August after nearly two decades as owner. In his latest announcement on social media, Moreno said they met with a number of individuals and groups interested in the club but realized their hearts remained with the team.

“During this process, it became clear that we have unfinished businesses and feel we can make a positive impact on the future of the team and the fan experience,” Moreno said on Twitter. “This offseason we committed to a franchise record player payroll and still want to accomplish our goal of bringing a World Series Championship back to our fans.”

“We are excited about this next chapter of Angels Baseball,” he added.

The owners said they were grateful to Galatioto Sports Partners, the firm he hired last August to help explore a possible sale of the team, “however, as discussions advanced and began to crystallize, we realized our hearts remain with the Angels, and we are not ready to part ways with the fans, players, and our employees,” Moreno said.

Moreno and his wife Carole purchased the Anaheim-based team in 2003 from the Walt Disney Co. for $184 million. It is now worth about $2 billion, according to Forbes.

The owners tried unsuccessfully for years to purchase Anaheim Stadium from the city. The latest agreement to purchase it and surrounding land for $320 million fell apart in May after an FBI investigation revealed negotiations involved a possible pay-for-play scheme by the former mayor.