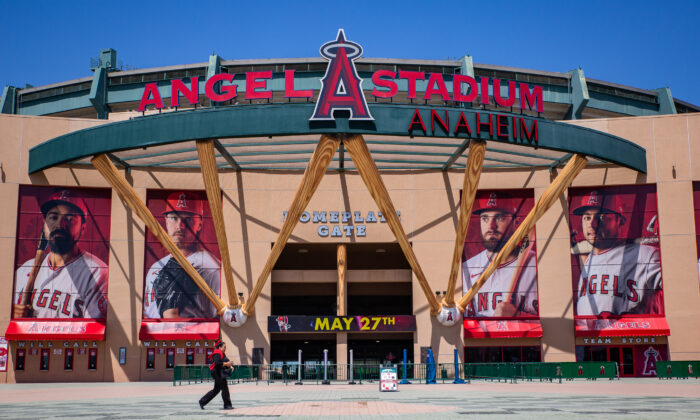 The company is seeking to recover the costs for title fees, escrow, legal and inspection fees, and other costs, plus legal fees, according to a letter sent to the city on June 15.

Anaheim and SRB Management first reached an agreement to sell Angel Stadium to the team’s owner for $320 million in December 2019, and it was amended nearly a year later. However, Anaheim’s city council voted May 24 to void the stadium sale following revelations in an FBI investigation that alleged former Mayor Harry Sidhu was involved in corruption related to the sale.

Sidhu resigned as mayor May 24. His attorney Paul Meyer told city officials at the time “a fair and thorough investigation will prove that Mayor Harry Sidhu did not leak secret information in hopes of a later political campaign contribution.”

The former mayor was not indicted or charged with a crime following the release of the FBI investigation information.

The city still has concerns, however, about whether the sale agreement is valid.

“We have received SRB’s letter, which was expected,” the city said in an online statement. “As we agreed to release escrow deposits and SRB agreed not to seek a court order compelling a sale, other legal positions and questions remained for future discussions. We continue to have concerns about whether the agreement any claim is based on is even valid, given what has recently come to light.”

Anaheim’s spokesman Mike Lyster told The Epoch Times SRB Management’s claim request will trigger a process of reviews and discussions with the company.

“It begins a long process of reviewing the claim as well as potential discussions between both parties and advising and getting any direction from our city council,” Lyster said.

SRB management considers the city council’s action to be a legal denial or refusal to perform a contract obligation, according to the claim filed with the city. The company said the city’s action was a default of the agreement.

The Angels baseball team can still play at the stadium under a lease agreement that ends 2029, with an option to extend the agreement. So far, the city has not received a request from the team to cancel the lease.

“There has been no request regarding the lease,” Lyster said. “They actually do not have the ability to opt out of the lease before 2029.”

Anaheim is working with its city council to address the stadium sale issue, according to the city’s statement.

Any future sale of the stadium could face additional hurdles from a new California bill. State Sen. Tom Umberg (D-Santa Ana) has proposed legislation in the wake of the Anaheim corruption investigation that would require all future land sales to meet conditions of the state’s Surplus Land Act. The act requires public entities to first offer any public land to affordable housing developers.

A request for comment to SRB Management’s Nevada office was not returned by press time.