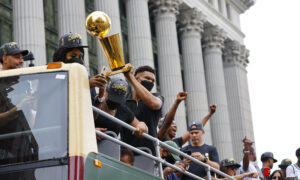 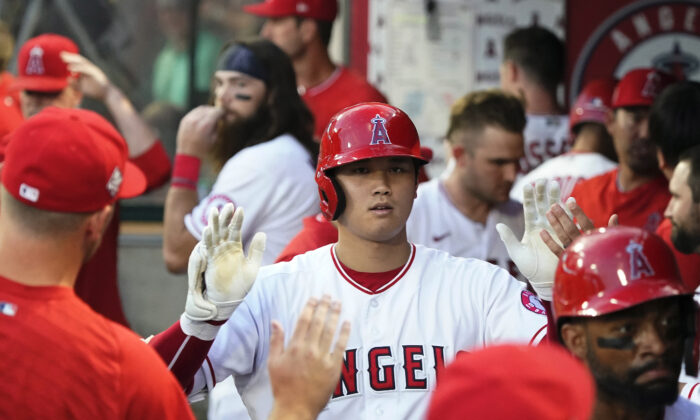 Los Angeles Angels' Shohei Ohtani celebrates his two-run home run with teammates in the dugout during the third inning of a baseball game against the Toronto Blue Jays, in Anaheim, Calif., on Aug. 11, 2021. (AP Photo/Marcio Jose Sanchez)
Southern California

ANAHEIM, Calif.—Shohei Ohtani hit his major league-leading 38th home run this season, but the Toronto Blue Jays hit it out of the park four times, including two from George Springer and a grand slam by Teoscar Hernández, to defeat the Los Angeles Angels 10-2 on Aug. 11.

Lourdes Gurriel also homered for Toronto, which has won 12 of its last 14 games and is second in the majors with 172 home runs. Rookie Alek Manoah (5-1) struck out 11 and won for the fourth time in his last five starts.

“It wasn’t like we were stretching him out, he was dealing,” Toronto manager Charlie Montoyo said of Manoah. “Today was so huge because our bullpen was thin. We needed something like that.”

Springer extended Toronto’s lead to 2-0 in the third inning with a solo shot to left-center off Dylan Bundy (2-9). He connected again in the ninth for the 17th multihomer game of his career and third this season.

On a night when fans entering Angel Stadium got shirts adorned with Ohtani’s face, the Japanese two-way sensation hit a two-run drive to center field to tie it at 2 in the third inning. It was Ohtani’s first home run since July 28 and only his fifth in 25 games since the All-Star break.

Ohtani’s home run snapped a 13-game home run drought, which was his longest of the season. It was the first time this season he had gone more than eight games between homers.

Manager Joe Maddon put Ohtani in the leadoff spot for the second straight game and is optimistic that he can get going back in the right direction.

“He doesn’t cower easily or get upset. He’s pretty strong willed,” Maddon said. “He knows since the break, and everyone hurt, it was going to be more difficult. I like what he is doing in the leadoff role and am going to keep him there for a little bit.”

Those would be the Angels only runs though as the Blue Jays responded with a five-run fifth to break it open.

Gurriel, who led off the third inning with a solo shot to left, lined a double off the left-field wall to start the fifth and chase Bundy. Gurriel scored the tiebreaking run on Santiago Espinal’s hit.

After Springer and Marcus Semien drew walks, Hernández sent an 0-1 hanging slider from Sam Selman beyond the left-field bullpens and into the stands for his first career grand slam.

Vladimir Guerrero Jr., who fouled out to the catcher in the previous at-bat, greeted Hernández with the team’s signature home run jacket near the dugout.

Hernández has homered in back-to-back and is seventh in the AL with a .305 batting average, but is often overlooked on a team that includes Springer, Guerrero and Bo Bichette.

“I think it’s funny and that’s so great,” Montoyo said about Hernández not getting his due at times. “He’s an all-star and he keeps doing it when it counts. It has been great. Today that hit was huge.”

Gurriel finished with three hits, including a single in the eighth.