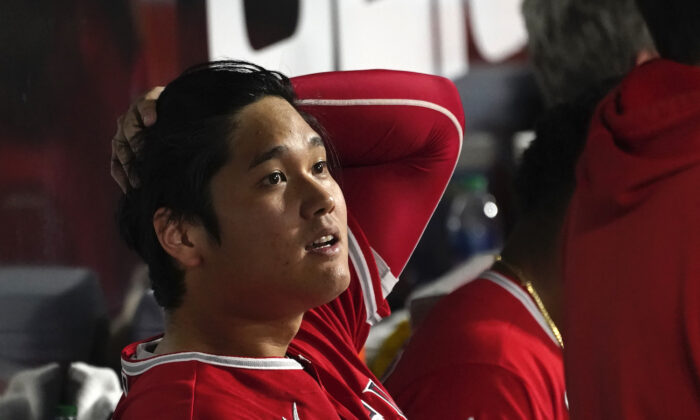 Los Angeles Angels' Shohei Ohtani sits in the dugout after being called out on strikes during the fourth inning of the team's baseball game against the Chicago White Sox in Chicago on Sept. 14, 2021. (AP Photo/Charles Rex Arbogast)
Southern California

Angels’ Ohtani Has Sore Arm, May Not Pitch Again This Season

CHICAGO—Two-way star Shohei Ohtani won’t pitch on Sept. 17 for the Los Angeles Angels because of a sore right arm that could sideline him as a pitcher for the rest of the season.

“If there’s any kind of lingering soreness, you may not see him pitch,” Angels manager Joe Maddon said prior to the team’s game against the Chicago White Sox on Sept. 16.

Ohtani (9-2, 3.36 ERA) felt soreness while playing catch Wednesday. Maddon said he raised the possibility of the likely AL MVP being shut down on the mound for the rest of the season during a meeting.

Maddon said there are currently no plans for Ohtani to be examined by a doctor, nor has it been determined when he would try to resume playing catch.

Maddon said Ohtani would like to continue pitching in an attempt to get his 10th victory.

“(Ten wins) always looks better than nine,” Maddon said. “But you can’t let that be the driving factor.”

The arm discomfort won’t prevent Ohtani from continuing to serve as a designated hitter. Ohtani entered Thursday’s game against the White Sox ranked second in the major leagues with 44 home runs and 74 extra-base hits and fourth with a .599 slugging percentage.