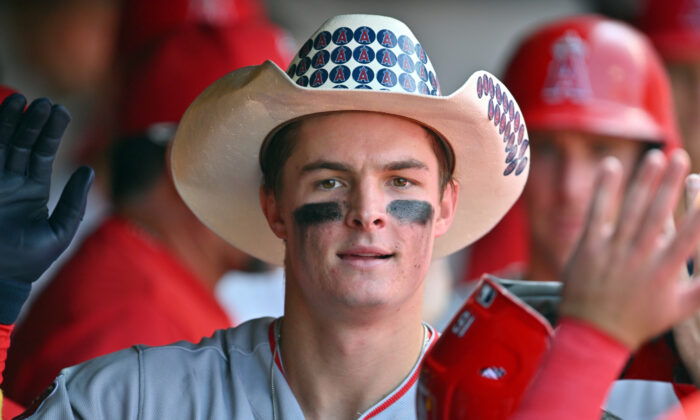 Mickey Moniak of the Los Angeles Angels celebrates after hitting a two-run homer during the third inning against the Cleveland Guardians at Progressive Field in Cleveland, on Sept. 14, 2022. (Jason Miller/Getty Images)
Baseball

The Los Angeles Angels will host the Seattle Mariners on Sept. 16 in Anaheim, Calif., the first game in a four-game series between two teams with completely different immediate objectives.

The Mariners (80–62) are currently tied with the Toronto Blue Jays for the top wild-card spot while the Tampa Bay Rays are just half a game behind the Mariners and Blue Jays.

The Angels (61–82), long since removed from realistic playoff contention, are using the remaining games to get a good look at some of their younger players, one of them being 24-year-old outfielder.

Moniak, acquired at the trade deadline on Aug. 2 from the Phillies for pitcher Noah Syndergaard, essentially was a bust in Philadelphia, which made him the No. 1 overall pick in the 2016 draft.

Spread over three seasons, he played in 47 games, hit .129 and had just two extra-base hits (one home run, one double) in 105 plate appearances.

This season might have been different, but in the last spring training game, he broke his right hand and was out until the end of May.

His bad luck continued with the Angels when, just five days after the trade, he broke a finger when hit by a pitch as he tried to bunt.

Moniak, though, has been a different player with the Angels in the short period of time he’s been with the club. In 11 games, he’s hitting .250 with three homers, two doubles, a triple and an OPS of .881.

Moniak said he is not surprised by the turnaround, particularly with his power potential.

“But it’s hitting, and you have to be comfortable up there and have everything working for you. I feel comfortable here, and I think that’s why the numbers are kind of coming up.”

“I think there’s a comfort level for him, being closer to home, being around family,” said Angels interim manager Phil Nevin, who also was a No. 1 overall pick. “Philly can be a tough place for a lot of people. It’s a special city, but it can be tough. I think the comfort level we’re seeing from him right now is going to benefit him a great deal, and we’re going to see the best version of what he is.”

On the other side, Mariners rookie outfielder Julio Rodriguez is just 21 but already making his mark in the majors. He got his 25th stolen base of the season on Wednesday against the Padres and became just the third rookie in major league history to hit 25 homers and steal 25 bases in a season. He did it faster than anybody else — 125 games, faster than Mike Trout, who did it in 128 games.

“Everything I do, every single stat I put up, I just do it for the team,” Rodriguez said. “I feel I’m not trying to put myself above anybody. I just want to be able to perform for the team.”