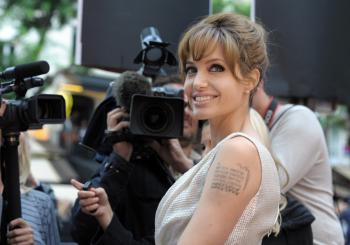 Angelina Jolie is slated to star in a film adaptation of the miniseries 'Unforgiven.' (Miguel Medina/AFP/Getty Images)
Entertainment

Alex Johnston
View profile
Follow
biggersmaller
Print
Angelina Jolie, after revealing she is going to direct, write, and star in a Bosnian war movie, will have a role in an upcoming film based on a UK mini-series, according to reports on Thursday.

Christopher McQuarrie, who wrote The Usual Suspects, has been hired to write an adaptation of the British mini-series Unforgiven.

Jolie will star as a woman who kills two police officers in a fit of rage when they show up to her house because her family is to be evicted.

The bulk of the movie will depict the woman's life after she spends 15 years in prison and her struggle to fit into the outside world.

The film is slated to be released via GK Films, who already has a strong working relationship with the 35-year-old actress, according to Deadline.com.

Jolie stars in the upcoming movie The Tourist alongside Johnny Depp.

She will also reportedly direct, write, and star in an upcoming movie about the Bosnian war.