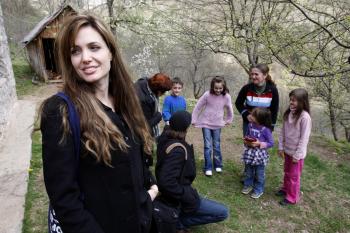 Helena Zhu
View profile
Follow
biggersmaller
Print
Angelina Jolie will shoot a new movie in Sarajevo, Bosnia and Herzegovina this fall about a love story set during the 1992-95 Bosnian War.

"The film is a love story, not a political statement," Jolie said in a statement issued on Saturday by the United Nations Refugee Agency (UNHCR), for which she is a goodwill ambassador.

Jolie was in Sarajevo over the weekend, meeting with members of Bosnia’s interethnic presidency to talk about assisting the thousands of returning war refugees.

She told Reuters that the movie’s cast will include actors from the various ethnicities that constituted the former Yugoslavia.

Earlier in April, Jolie and her partner Brad Pitt visited some returning war refugees in Bosnia and Herzegovina at a collective center in the town of Gorazde to highlight the 113,000 Bosnian and 7,000 Croatian refugees still living there from the war, many of whom are living in collective center under appalling conditions.

During the Bosnian war, over 2.2 million people were displaced.

"I hope we can find solutions for the remaining tens of thousands of displaced people," Jolie said on her April visit. “Only then can we really close one of the most tragic chapters in modern history."