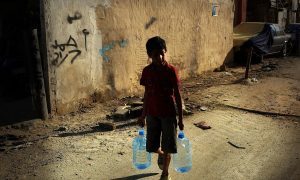 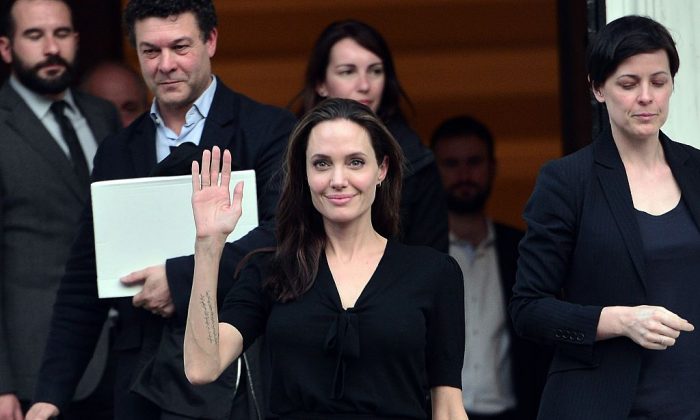 Angelina Jolie on Refugee Crisis: World Needs to Pull Together Like After World War II

Angelina Jolie, special envoy of the UN High Commissioner for Refugees, explained her hopes that world countries will pull together to solve the current refugee crisis.

Speaking at the BBC Radio Theatre in London on May 16, Jolie assessed the severity of the crisis and laid out what she believes is the solution.

Jolie said there’s nothing wrong with the current system for handling refugees—placing them in camps and selecting the “the exceptional cases of the most vulnerable people” for asylum.

But “today, we are seeing it break down,” she said, because of the number of conflicts and how many refugees are fleeing.

Over 60 million people are displaced today—one in every 122 people, she said. That’s the most since World War II.

Moreover, people remain displaced for an average of 20 years, Jolie said. The portion of people who return home is the smallest in 30 years.

Jolie said Europe has attracted the most attention, but deals with a minor part of the problem.

“We in the West are neither in the center of the refugee crisis, nor, for the most part, the ones making the greatest sacrifice,” she said.

Some 1.8 million migrants crossed European borders in 2015—the majority from Syria, Afghanistan, and Iraq, according to Frontex, a European Union agency monitoring the border, BBC reported.

Turkey, for example, hosts 1.7 million registered refugees from Syria, according to the UN High Commissioner for Refugees (UNHCR).

Chinese Refugee, Prevented From Traveling to US, Now Abducted

Jolie said nations should stick to immigration and asylum laws, seek agreement with their peoples on how many refugees they can realistically accept, and cooperate with other nations to handle the crisis.

Countries should also restore people’s confidence and mitigate fear of refugees, perhaps by showing the rigorous process to be granted asylum.

Jolie said the United States should take a more prominent role, similar to the restoration efforts after World War II.

In its famous Marshall Plan, the United States gave Europe $13 billion (almost $120 billion in current dollars) worth of investments, food, supplies, fuel, and machinery to assist after the war.

Jolie said the country must step up, but also seek cooperation from other nations.

“I believe that this is again that once-in-a-generation moment when nations have to pull together,” she said.

She advocated for every country doing its “fair share,” but also acknowledged the problem has to be resolved at the source—solving the conflicts people are fleeing from.