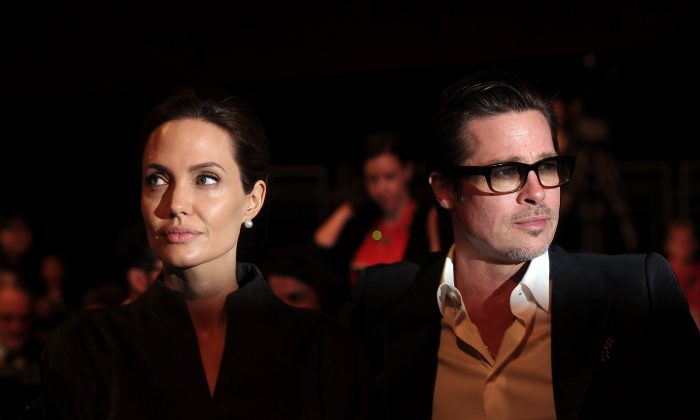 US actress and special UN envoy Angelina Jolie (L) and her husband US actor Brad Pitt attend the fourth day of the Global Summit to End Sexual Violence in Conflict in London on June 13, 2014. (Carl Court/AFP/Getty Images)
Entertainment

Angelina Jolie met with the man who took her virginity behind her husband’s back, leaving Brad Pitt furious, according to a new tabloid report.

Jolie, 39, reportedly was together with Hollywood costume designer Anton Schneider when she was a teenager, living at her mother Marcheline’s apartment.

The pair bumped into each other by chance last year at a coffee shop in the Hollywood area, according to the National Enquirer tabloid.

“Anton bumped into Angie at a Starbucks on the Warner Bros. lot. When Angie saw Anton, they hugged and she sat down with him. They chatted for 20 minutes, catching up and talking about each other’s family and kids,” said a mutual friend.

“It was nice for them to hear about each other’s lives and get some things off their chests about their pasts.”

But the exchange, which didn’t include any romance, disturbed Pitt, who previously didn’t know the identity of one of Jolie’s first loves.

“While it was an innocent meeting, Brad was fit to be tied when he found out. He exploded, asking her repeatedly, ‘Why didn’t you tell me?!'” a source said.

“Angie said meekly that Anton was ‘just part of (her) past,’ and she didn’t think it was important. Well, it was to Brad!”

“Brad realizes that Anton is a lover from Angelina’s dark past but that doesn’t make this any easier. Quite the opposite, it makes things worse,” said the source.

“Now, hearing that Angie reconnected with her lover Anton – even though no romance was involved – was like adding insult to injury. It’s definitely affected their newlywed bliss.”

Jolie opened up about the wedding for the first time in an interview with Vanity Fair magazine, revealing that all of their children were involved, including helping write the vows.

“They (the kids) did not expect us never to fight, but they always made us promise to say sorry if we do. “So they said ‘do you?’ and we said: ‘We do!'” Jolie said.

“There was no cake so Pax made a cake. The kids made little pillows for the rings and Knox practiced (being the ring bearer) with an acorn that kept falling off the pillow.”

Jolie said that it does feel different to be married.

“It does feel different,” she said, “it feels nice to be husband and wife.”